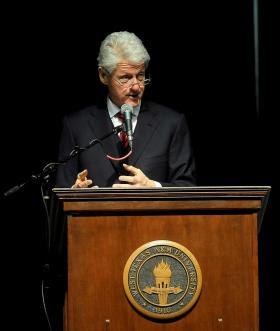 On Tuesday night Bill Clinton made his second visit to the Texas Panhandle in the last four years (with his previous visit being to support his wife in the 2008 campaign). This time he spoke at West Texas A&M University as a guest of the school's Distinguished Lecture Series. And in his speech he made a point that makes a lot of sense -- one that every American should consider before voting in the next election.

The point was that there is a difference between political ideology and finding solutions to the problems that face this nation. Clinton said that debating politics does little to move the country forward, and compared political talk shows to "watching mud wrestling". He went on to say, "We can do lots of stuff to grow the economy, but if we spend most of our time making ideological arguments. . .we're not having the right debate. We're talking about whether to do something, instead of how to do it."

He is absolutely right. Instead of addressing our problems and how best to solve them, we have digressed into an argument over whether they should be solved at all. The Republicans have been especially bad at this. Instead of discussing how to design and initiate a job creation program to put millions of Americans back to work, they want to discuss whether it is ideologically-correct to have government help to create jobs (or help those who've lost their jobs).

Instead of debating how to ensure that all Americans (minorities, women, gays, etc.) can achieve equal rights, the Republicans want to argue over whether they should be equal at all. Instead of discussing how to provide decent medical care for all Americans, the Republicans want to argue about whether the poor and working classes even deserve to have decent medical care insured.

Instead of discussing how to make our tax system fair and equitable for all Americans, the Republicans want to insure that the rich and corporations won't have to pay their fair share of taxes. Instead of finding solutions to the problems Social Security and Medicare face (or will face in the future), the Republicans want to talk about whether they should exist at all.

I could go on and on, but you get the point. We have two political parties, but they are not both concerned with solving the country's problems. While Democrats are searching for solutions, the Republicans are concerned only with political ideology. This is probably because the Republicans have no solutions (or ideas on how to improve Democratic solutions). And the last refuge for any party without solutions is ideology (which like "mud wrestling" may be entertaining, but offers nothing substantial).

Think about this before you go to the polls in November -- and then vote for the party willing to search for solutions.
Posted by Ted McLaughlin at 12:06 AM