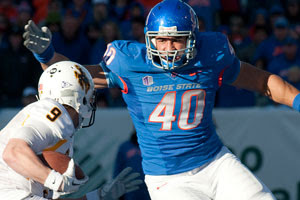 It was a long stretch between the Dallas Cowboys first and second draft picks -- about 75 places (because they had traded away their second round pick), and that made for a fairly boring second night of the draft. I'm not really complaining. I think it was well worth losing the second round pick to get Morris Claiborne, the LSU cornerback, in the first round -- a player who makes the defense much better (and probably will for a long time).

The Cowboys finally got to pick again in the third round, with the 81st pick of this year's draft. The player they picked was Tyrone Crawford, a 6'4", 275 pound defensive end who played for Boise State. The Cowboys needed a little more help on their defensive line, but from what I hear Crawford is a little raw. Hopefully, he is a fast learner and a hard worker and can contribute in the coming season. Here is what NFL.com had to say about him:

Crawford is quick to get out of his stance off the snap and has the instincts to slant and hit a gap without being touched. He is consistently disrupting plays in the backfield and is a solid tackler. He is a strong player who shows an explosive arm jolt when keeping blockers at bay. Crawford shows good change of direction when stopping to pursue plays laterally. As a rusher, his motor is the key to his success. He never gives up on a play and can use a strong burst to get to the quarterback. He has a ton of upside, which undoubtedly increases his values to teams who are set at the position and willing to patient and work with him. Despite his size, he could even play special teams early on in his career because he has such a nasty demeanor.

Crawford is a raw prospect who only has one year of collegiate playing experience at the Football Bowl Subdivision level. He would be a project early on for the team that selects him, and he could have a tough time adapting right away. He has had trouble getting off double teams, which could be a technique issue, a likely possibility given his well-documented strength. Crawford will need extra coaching and attention to adjust to the NFL.
Today, the draft finishes up with rounds four through seven. The Cowboys have five picks -- two in round four, one in round five, one in round six, and one in round seven. Will there be any future Cowboy greats among those five picks? There's no way to know. In picks past the third round a team can strike gold or strike out. It will be interesting to see who they are though.
Posted by Ted McLaughlin at 12:02 AM