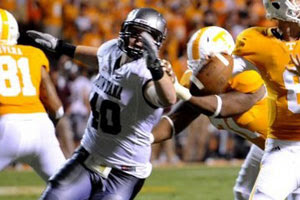 Any player drafted in the first round is expected to immediately contribute to his new team, and should be a starter right away. In the second and third rounds the players might not be expected to be immediate starters, but if correctly picked, they should make the team and work their way into a starting position. The same cannot be said of players picked in the fourth through seventh rounds. They might turn out to be great players, or they might not even be on the team on opening day. We simply won't know until they get to training camp and compete for a position on the team.

But on the draft's third day, all teams are excited about the players they were able to pick in the final four rounds -- and the Cowboys are no exception. They drafted five players on day three, and hope that those players will turn out to be wise choices and real contributors to the team. Here are the five players chosen by the Cowboys in rounds four through seven: