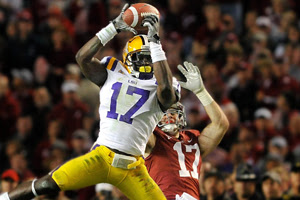 It's no secret that one of the biggest weaknesses of the Dallas Cowboys last year was in their secondary. They just gave up too many receptions last year, especially late in the game. The Cowboys had already addressed this problem in free agency -- by signing a top-notch cornerback (Brandon Carr) and a solid safety (Brodney Pool). Because of this, most people thought the Cowboys would use their pick (14th in the draft) to get a pass rusher (either a defensive lineman or an outside linebacker).

But Jerry Jones is nothing, if not unpredictable. In his 21 years of NFL drafts, he has traded his first round pick in all but six years. Usually that meant he traded down to get more overall picks. But this year he went the other way. Jones traded the Cowboys first and second round picks to the Los Angeles Rams for their first round pick (the 6th overall pick of the draft).

With that 6th pick of the draft, the Cowboys chose LSU cornerback Morris Claiborne -- who was generally regarded as not only the best cornerback in the draft, but also the best overall defensive player in the draft. With the addition of Claiborne ( a true "shutdown" corner) to Carr (considered one of the league's top corners), Orlando Scandrick (just signed to a new long-term contract), and Mike Jenkins (still recovering from an injury), the Cowboys have gone from a weak secondary to having possibly the best secondary in the league.

I think trading up to get Claiborne was a stroke of genius, and I can't believe it only cost them a second round pick. That's almost highway robbery. Even Stephen Jones said he was surprised they didn't have to give up more than just a second round pick to get Claiborne -- who the Cowboys said was the only player they would trade up to get. He was the second player on their draft board (behind quarterback Andrew Luck who was picked first in this draft).

Well done Jerry, Stephen, and Jason! I hope you can repeat this magic in your remaining draft choices.
Posted by Ted McLaughlin at 12:02 AM