The Drone Attacks Should Be Stopped 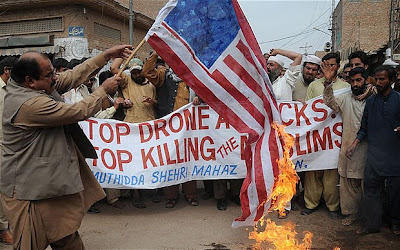 There was a headline and story at msnbc.com World News today that bothered me quite a bit, and I'm convinced that more Americans should be bothered about it. It's not that it was an unusual event. In fact, it's far too common -- so common that most Americans will accept it without even thinking much about it. Here is the headline:

It seems that either the military or the CIA decided that "suspected militants" were using part of a girl's high school in Miramshah (North Waziristan, Pakistan), so they fired missiles from a United States drone to kill them. There are several aspects to this that bother me a lot:

* Should we be firing missiles from a drone at any school? We know that missiles are not specific weapons and most of the time innocent civilians are killed -- and this time it is very likely that the "collateral damage" will be children. How many young high school age girls will never live to be adults because of this strike?

* The missiles fired at the school were meant to kill "suspected" militants. Should we really have the right to kill people because someone in our government "suspects" them of being an enemy? Isn't that a lot like carrying out the death penalty on someone because the police "suspects" them of criminal activity? In this country we require a jury to be convinced beyond a reasonable doubt of a person's guilt before any penalty is assessed or carried out. Why should it be any different before we kill people in another country, especially a country we are not at war with?

* Pakistan is supposed to be our friend, and they have asked us not to carry out drone attacks in their country. We wouldn't do this to most of our other friends, so why is it OK to kill "suspects" in Pakistan? Can you imagine the furor that would be caused if we did this in England, Germany, or Israel (or even Russia or China)? Aren't we just doing it to Pakistan because we know we can get away with it?

Sadly, I doubt if most Americans really care about this -- after all, they're just foreigners, and with our ethnocentric attitude no foreigner is very important. But we should care. This kind of thing is destroying this country's reputation around the world -- and it's killing innocent people. Do we really want to be thought of as a brutal and uncaring nation? That is the reputation we are creating.

The drone attacks should never be done outside of a war zone, and even then we need to be extra careful to make sure only enemy combatants are killed. "Collateral damage" is unacceptable.
Posted by Ted McLaughlin at 12:02 AM