Mean Policies Of The Congressional GOP 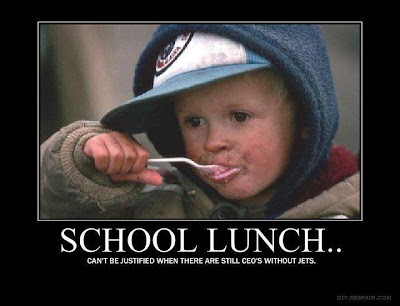 Some of you may think the picture and words above are more than a little bit harsh. After all, no one would really deny poor kids a nutritious lunch just to give rich people (who are already making record profits in this recession) bigger tax breaks, would they? The very idea of it is unthinkable. That is, unthinkable to anyone but congressional Republicans.

As mean-spirited and hard-hearted as it sounds, that is exactly what congressional Republicans are proposing. They want to keep all of the current tax breaks for the rich, and they want to give the rich (and corporations) massive new tax breaks -- and they want to do it on the backs of the poor and children (by taking food out of their mouths).

Just a few days ago, the Republican-dominated House Agriculture Committee approved a bill cutting billions of dollars from the SNAP Program. It includes an $11.5 billion cut that would kick 1.8 million low-income people off food stamp roles. It would also end free school meals for over 280,000 children in struggling families. And you can bet when this awful bill reaches the House floor, the Republican-dominated House will gleefully pass it.

The Republicans say these cuts are needed so they can add more money for the military to the budget (even though the Pentagon says that money is not needed), and to pay for new tax cuts for the wealthy. The really crazy part of all this is that these are the same politicians who brag publicly about what wonderful "christians" they are. It makes me wonder if they have ever read the words of the Jesus they claim to love and follow (since his teachings certainly don't favor the rich over the poor).

In 2010, they forced a tax cut for multi-million dollar estates that costs the federal budget about $11.5 billion a year -- a tax cut they would like to see extended (along with new tax cuts for the rich they are proposing). That money, which the rich could easily afford to pay, would fund food aid for that 1.8 million poor people and the 280,000 children's school lunches for the next 10 years.

This is just one more example that shows the Republicans don't care about anyone but the rich. For them, the hundreds of millions of other Americans should have been born rich if they wanted (or needed) any government help. How can any decent person vote for the Republican Party?
Posted by Ted McLaughlin at 12:06 AM