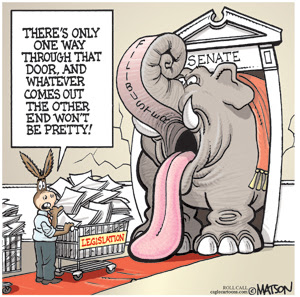 (The cartoon above is by R.J. Matson in Roll Call.)

Conservatives and liberals have always had a different vision of what was the best path for the country to take. But in the past, the politicians on both sides of the aisle have been able to see past their ideology and compromise to reach a solution that was good for the country. That is no longer true. While President Obama (and most Democrats have offered to compromise, they have been rebuffed by the Republicans -- who have moved so far to the right that they can't even see the center anymore. They currently put their ultra-right-wing ideology above what is good for the country and its people.

Thomas E. Mann and Norman J. Ornstein have written a very good article for the Washington Post (which I urge you to read) on this troubling issue. Here is a small part of what they have to say:

We have been studying Washington politics and Congress for more than 40 years, and never have we seen them this dysfunctional. In our past writings, we have criticized both parties when we believed it was warranted. Today, however, we have no choice but to acknowledge that the core of the problem lies with the Republican Party.


The GOP has become an insurgent outlier in American politics. It is ideologically extreme; scornful of compromise; unmoved by conventional understanding of facts, evidence and science; and dismissive of the legitimacy of its political opposition.


When one party moves this far from the mainstream, it makes it nearly impossible for the political system to deal constructively with the country’s challenges.


“Both sides do it” or “There is plenty of blame to go around” are the traditional refuges for an American news media intent on proving its lack of bias, while political scientists prefer generality and neutrality when discussing partisan polarization. Many self-styled bipartisan groups, in their search for common ground, propose solutions that move both sides to the center, a strategy that is simply untenable when one side is so far out of reach.


It is clear that the center of gravity in the Republican Party has shifted sharply to the right. Its once-legendary moderate and center-right legislators in the House and the Senate — think Bob Michel, Mickey Edwards, John Danforth, Chuck Hagel — are virtually extinct.


The post-McGovern Democratic Party, by contrast, while losing the bulk of its conservative Dixiecrat contingent in the decades after the civil rights revolution, has retained a more diverse base. Since the Clinton presidency, it has hewed to the center-left on issues from welfare reform to fiscal policy. While the Democrats may have moved from their 40-yard line to their 25, the Republicans have gone from their 40 to somewhere behind their goal post.
Posted by Ted McLaughlin at 12:00 AM