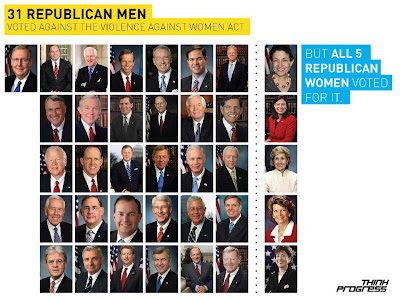 The Republican Party claims it is not waging a war on America's women. They claim this is just a false accusation that was made up by Democrats to embarrass them. But that is hard to believe considering the Republican record recently. They oppose the right of a woman to control her own body. They oppose giving women equal pay in the workplace. They oppose free and easy access to contraception for women. They oppose healthcare reform (Obamacare) which outlaws higher insurance premiums for women. They want to defund Planned Parenthood (which provided needed health care for poor women). And they want to slash social programs (where the majority of participants are single women with children).

That would be enough to convince any sane person that the Republicans are truly waging war on women. They consider them to be second-class citizens -- undeserving of equality with white men. And just to drive that point home, 31 Republican senators (all white men) have voted against the Violence Against Women Act (VAWA). This move was so far over the line that all five Republican women in the Senate abandoned their own party and voted with the Democrats (even though they have voted with their party and against women on most other Senate votes).

How could these 31 white male Republican senators possibly justify such a dastardly vote? Two reasons. First, they really don't believe women are worthy of the same rights and protections that men have (they are misogynists). Second, the Democrats had the audacity to widen VAMA to include more abused people -- including immigrants (even undocumented immigrants), same-sex couples, and Native Americans abused by non-Native Americans.

For these white male Republicans, that is just going too far. They think it should be obvious that it is OK to abuse and attack these people. And to prove their point, they voted to allow domestic violence against all women. It's just one more example showing us that Republicans (especially the white males) value their right-wing ideology more than they care about American citizens.

How can any woman (or any man that cares for the women in his life) vote Republican?
Posted by Ted McLaughlin at 12:06 AM