Warmongers Of The Right-Wing Are Wrong 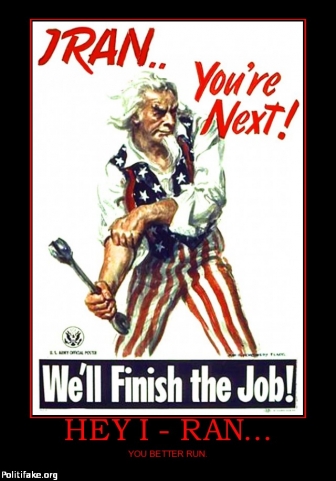 The graphic above sums up pretty well what the right-wing Republicans want. Fear is their best-selling product, and they want to convince our citizens that Iran has (or will soon have) an nuclear weapon -- which they would be crazy enough to use on Israel and other countries (including the United States).

The international nuclear inspectors, our own CIA, and even Secretary of Defense Leon Panetta have all tried to assure Americans that the Iranians do not currently have a nuclear bomb, and there is no indisputable evidence that they intend to build one. But they have been drowned out by the terrified screams of the right-wing warmongers. They see keeping the American people scared enough to accept perpetual war as the road to their own maintaining of power (and to fat corporate profits).

The right-wing wants a war with Iran. Some would like for Israel to start that war by bombing Iran. Others would like for the United States to do the initial bombing. And still others would like to see us invade Iran and engage in a bit of nation-building (like we've done so "successfully" in Iraq and Afghanistan).  These are all insane ideas. War should never be "preventative", but always a last resort (after every other possible alternative has been tried and failed).

Fortunately, at least so far, cooler heads are prevailing -- not only in this country, but also in Israel. Israel's chief military officer, Lt. General Benny Gantz, is one of those voices of reason. He doesn't think Iran has a nuclear bomb, and is not sure they even intend to develop one. Here is what he told the newspaper Haaretz:

"If Iran goes nuclear it will have negative dimensions for the world, for the region, for the freedom of action Iran will permit itself."


"But despair not. We are a temperate state. The State of Israel is the strongest in the region and will remain so. Decisions can and must be made carefully, out of historic responsibility but without hysteria."


"Iran is going step by step to the place where it will be able to decide whether to manufacture a nuclear bomb. It hasn't yet decided whether to go the extra mile."


"The program is too vulnerable, in Iran's view. If the supreme religious leader Ayatollah Ali Khamenei wants, he will advance it to the acquisition of a nuclear bomb, but the decision must first be taken. It will happen if Khamenei judges that he is invulnerable to a response. I believe he would be making an enormous mistake, and I don't think he will want to go the extra mile. I think the Iranian leadership is composed of very rational people."

It is time to back down from the violent rhetoric. Iran does not have a nuclear bomb, and we don't know whether they even want to build one (which they claim they don't want to build). And after the fiascos in Iraq and Afghanistan (which we're still embroiled in), the last thing we need right now is another war, anywhere.
Posted by Ted McLaughlin at 12:04 AM