CEO Pay - It's Beyond Outrageous 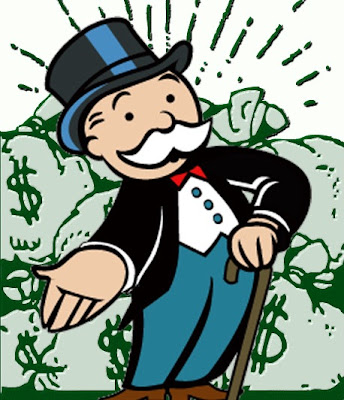 American CEO's these days make the Monopoly Man (pictured above) look like a small fry. While he's generally regarded by game-players as a multi-millionaire, today's CEO's make multiple millions of dollars every single year (and then think they should make even more the next year). There is truly no limit to their greed, and they can get away with it because the boards that pay them are made up of men just like them.

I don't begrudge these people for getting rich, but I am more than a bit upset at how they do it and the fact that they don't seem to think they owe any taxes to the country that made it possible. I have posted several times on this blog about how the income of the super-rich has risen by about 270% in the last 30 years or so, while the income of the average American worker has remained virtually flat (and if inflation is figured in, workers have actually lost significant buying power).

The rich, including the CEO's, have stolen the portion of gains in productivity that should have gone to workers. They are also paying less in taxes, with the top rate on their earned income being less than it has been since before World War II. But most of them don't pay that top rate. Most CEOs take a big hunk of their pay in stock, which when they sell is taxed at only a measly 15% (less than many in the middle class must pay -- for money they earned by working).

How totally outrageous has CEO compensation gotten? Last year Simon Property's CEO, David Simon, was given a pay package worth $137 million a year ($132 million of it in stock so he can avoid paying an earned income tax rate). Here are some things to put that in perspective:

* It would take a minimum wage worker ($7.25 hr.) at least 9,096 years to make what Simon made in just one year.
* It would take a worker making the national median salary ($39,312) at least 3,489 years to make what Simon made in a single year.
* Assuming a 60-hour work week, Simon's pay was a staggering $43,963.64 an hour (or $732.73 a minute).
* The average worker makes less in one whole year than Simon makes in just one hour (and a minimum wage worker would have to work for nearly 3 years to make Simon's hourly wage).
* Simon makes more than the salaries of the top 600 government leaders in this country combined (President, Vice-President, the Cabinet members, Supreme Court justices, members of the Senate, members of the House of Representatives, and all 50 state governors).

But Simon's compensation is much more than most CEO's make. The average compensation for an American CEO is about $9.6 million a year. But before you start feeling sorry for these guys, consider this:

Is it any wonder that the gap in wealth and income between the 1% and the 99% is now larger than it has been since before the Great Depression. Do you think this is healthy for our economy? Do you think it is right for the richest 1% to steal ALL of the increase in worker productivity and leave nothing for the workers? Do you think it is right for millions of American workers to be unemployed and millions more to be working for minimum wage (a wage that won't even support a single person, let alone a family)?

I don't think this is right. There are Latin American countries (commonly referred to as "banana republics") that have a fairer distribution of wealth and income than the United States does. We need to make some changes in this country if we want the economy and the country to survive and remain a world power. If we don't, our middle class will simply continue to disappear until we have nothing but the haves and have-nots (and no way for the have-nots to ever better themselves).

We can start by voting Republicans out of office this November, but that won't be enough. We must then demand that the Democrats actually get to work and do something for the 99%.
Posted by Ted McLaughlin at 12:06 AM