Minimum Wage Is Too Small To Live On 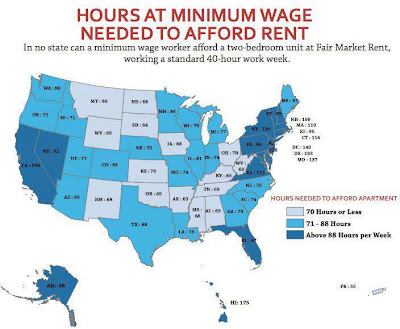 The chart above (which you can click on to get a larger and easier to read version) shows the complete inadequacy of the minimum wage ($7.25 an hour, or about $15,080 a year) in this country. It shows the number of hours that a minimum wage worker would have to work to pay for a two bedroom apartment (at the fair market rate in each state).

The awful truth is that a person who works 40 hours a week (a full-time job) for the minimum wage would not be able to pay for a two bedroom apartment in any state. And in more than half of the states, it would take working 71 hours or more at the minimum wage to pay for that apartment. This fact alone should make it clear that no one can support a family (which would require at least a two bedroom apartment) on a minimum wage salary -- and we haven't even considered items such as food, clothing, transportation, and assorted other expenses that it takes to raise a family.

Some might respond that the minimum wage was never meant to support a family, but was intended to be paid to single people (primarily young people entering the work force). But that argument just doesn't hold water. Wages are not paid according to a worker's age, but according to the job he/she is doing. And millions of people of all ages are working for minimum wage in America.

In fact, the minimum wage is not even adequate for single people of any age. After you include the cost of food, transportation and clothing, it would be extremely difficult (if not impossible in most states) for a person to even be able to afford an efficiency apartment.

And while most congressional Democrats don't have the political courage to support a truly decent minimum wage, the Republicans are far worse. Many, if not most, Republicans would like to eliminate the minimum wage altogether, and let businesses pay workers even less than $7.25 an hour (while supporting tax cuts for millionaires and billionaires). Doesn't that prove that they care only for the rich?

The minimum wage needs to be raised significantly. It would not only be the decent thing to do, but also the moral thing. If we want people to work their way out of poverty, we must give them the tools with which to do it -- and the two best tools we have are a decent minimum wage and an opportunity for a decent education.
Posted by Ted McLaughlin at 12:02 AM