Obama - Big Spender Or Not ? 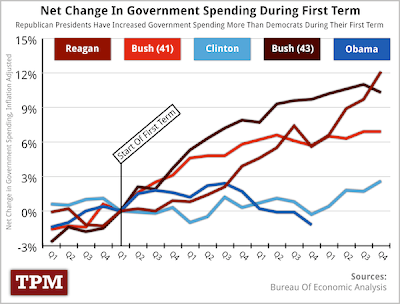 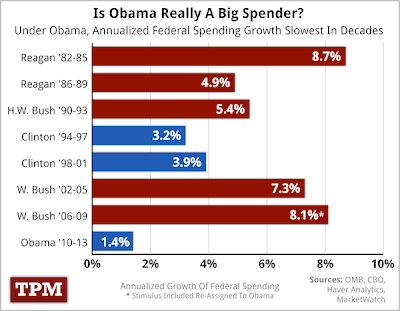 There is a big argument going on between the left and the right in this country. The left says that President Obama is not a "big spender", and the right says he is. To back up their argument, the right points to the increase in the national debt since President Obama has been in office. That debt has increased from about $10 trillion when President Bush left office to a current debt of about $15 trillion. They say this means Obama has to be a big spender.

To back up their argument, the left points to charts like the two above. These charts show that the increase in federal spending, both in increased spending over the first term of recent presidents (top chart) and the annualized increase in spending for recent presidents (bottom chart), has been less for both Clinton and Obama than for any of the Republican presidents (Reagan, Bush I, and Bush II). They say this shows Obama is not a big spender.

So who is right? First, let me say that the facts used by both sides are generally correct -- the national debt under Obama has ballooned by about 50%, and the increase in government spending has been less under President Obama than under any president since President Eisenhower. How can both of these facts be true?

It's because the increase in the national debt has not been due to a large increase in government spending. It is mainly due to a large drop in revenues received by the government. Corporations are paying a much smaller share of total government revenues (compared to national GDP) than they have paid since World War II (due to increased subsidies, tax loopholes, and the hiding of corporate profits in overseas accounts).

And it is not just the corporations paying less in taxes. The rich are also paying less. Due to the Bush tax cuts (which mainly helped the rich), the top tax rate is lower than it has been since World War II. In addition, most of the super-rich (the investor class) don't have to pay that top rate. They pay only a 15% tax on capital gains (return on investment) which makes up the bulk of their income -- allowing them to pay a smaller tax rate than most middle class taxpayers do. The rich also hide money overseas to avoid paying taxes on it.

So as it turns out, it is not Obama that is the big spender -- it is the Republicans. Thanks to their tax policies, they are the ones responsible for ballooning the national debt. And the only way to bring that national debt back down to a reasonable level is to change tax policy. Some of the things that can be done are:

* Eliminate the Bush tax cuts -- at least for those making over $250,000 a year. This would still make the top tax rate only equal to what it was in the Clinton administration (and it would still be lower than under any president between Clinton and Roosevelt).

* Eliminate the special 15% tax rate for investments. It is simply unfair for those who make millions gambling in the stock market to pay a smaller tax rate than those who actually have to work hard to earn their income. All income should be taxed as earned income at a progressive tax rate (where those who make the most pay the highest tax rate).

* Eliminate the unneeded tax loopholes and corporate subsidies that allow many corporations to avoid paying taxes while making record profits. And penalize companies that export American jobs with a higher tax rate.

There are other things that could be done (like cutting our extremely bloated military budget), but these things I listed would be a very good start, and would bring the national debt back under control in just a few years.
Posted by Ted McLaughlin at 12:04 AM