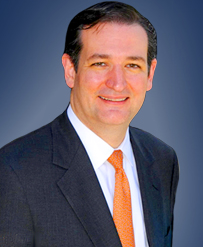 The two men pictured above are the leading candidates in the Republican primary to run for the senate seat being vacated by Kay Bailey Hutchison. Both are rabid right-wingers, and they lead a field of rabid right-wingers. If you thought Hutchison was a bad senator (and she definitely was), just wait until you see these guys. Lt. Gov. David Dewhurst (on the left) is currently leading ex-Solicitor General Ted Cruz (on the right).

Cruz is so far to the right that he thinks the United Nations is conspiring to ban golf courses in the United States. I wish I could say that was a joke, but he really said that while campaigning (and of course, he's pledged to foil the nefarious U.N. plot).

Dewhurst is no better, having backed plans to rape Texas women with a sonogram wand if they want an abortion, suppress voting in the state, and gerrymander Texas' new districts to make sure they go to white Republicans (even though Hispanics made up the vast majority of population growth in Texas).

The race has gotten so crazy that Cruz is now running TV ads accusing Dewhurst of being a "moderate". That may not sound bad to reasonable people, but to teabaggers like most Texas Republicans, it is the kiss of death to be labeled as a moderate. Dewhurst has fought back by getting the endorsement of Gov. Rick Perry and running ads featuring Mike Huckabee (neither of whom could be considered moderate in any way).

The fact is that there is no moderate running for the Republican nomination (and probably none left in the Texas Republican Party at all). If Texas elects and sends to Washington either of these two men (or any of the other Republicans in the contest), then the people of this state will owe an apology to the rest of the nation. And sadly, as red as Texas is, that is very likely to happen.

So far, neither of these candidates has reached the magic 50% mark in the polls, and there is probably going to be a run-off for the nomination. But a new Public Policy Polling survey shows that Dewhurst has carved out a nice lead for himself. Here are the latest numbers: