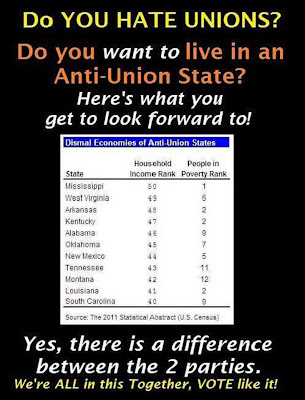 On this Labor Day, we need to look at what the anti-union ("right to work") states actually accomplish. And that is fat wallets for corporate bigwigs, while workers get low wages with many of them living in poverty (even while working full time. The corporate moguls have spent a ton of money on anti-union propaganda, and have been able to fool a lot of Americans into believing unions are a bad thing. Nothing could be farther from the truth. Unions are the only real power the working man has, and without unions workers would still be working 12 hours a day in six to seven day workweeks. Their would be no paid vacations or sick time and no weekends off. And children would still be ruining their health and their future by working in mills and mines.

Unions were the primary force in building a strong middle class in America, and as their power is weakened the middle class is disappearing.We don't need less or weaker unions. We need more and stronger unions. That is why the Republicans must be voted out of power in November -- because they are anti-union. They care only for the rich and corporations, and nothing for workers or small businesses. 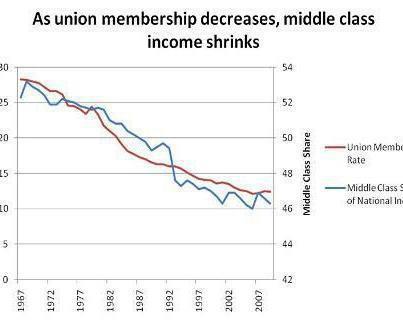