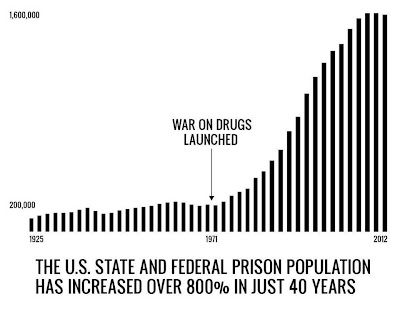 In 1971, the United States declared a war on drugs. In the 40 years since that time, well over $1 trillion has been spent and the prison population has ballooned over 800% (causing massive new spending to build new prisons and take care of the ever-growing prison population). It has gotten to the point that the United States now has the largest prison population in the world -- both in absolute numbers and in prisoners as a percentage of the population. We now jail more people than countries known for having a police state.

And what do we get for all this spending and incarceration? Nothing. The so-called "war on drugs" hasn't reduced drug use in this country or impeded the flow of drugs into the country. It has been a massive and total failure -- and yet our government continues it as though something were being accomplished.

We should have learned a lesson the first time this country tried Prohibition and outlawed the production, possession and use of alcohol. It was also a failure. All it did was to create a new black market that funneled millions of dollars into organized crime (and creating fighting and violence over that black market). That prohibition was repealed because people realized that the better path was to regulate, alcohol and tax it, and set up rehabilitation centers for those who developed an addiction (alcoholism).

But we didn't learn from that failed attempt at Prohibition of a drug, and now we have recreated the same conditions -- with a new black market, crime cartels, and violence over who will control that black market. Drug possession and use should never have been criminalized. It is much more a medical problem than a criminal one. And it can be handled much more effectively by education, regulation, taxation, and rehabilitation.

You cannot solve a social and medical problem by criminalizing it. When will we finally realize that, and repeal this second failed attempt at Prohibition?
Posted by Ted McLaughlin at 12:06 AM