A Few Thoughts On Our Next Holiday 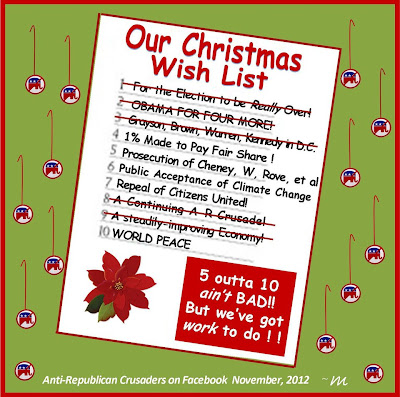 I saw this on Facebook, and I thought it was a great christmas list. And the best part about it is that we've already received half of the gifts on the list -- and they were wonderful gifts! Now if we could only get some of the others. I don't expect we'll ever get numbers 5 and 10, but I would settle for the other three and be very happy.

By the way, it looks like the annual War on Christmas has already started -- and as usual, it wasn't an atheist or agnostic or any other non-christian who fired the first volley. It was everybody's favorite crazy nut-job preacher, Pat Robertson. Here's what he said:

As an atheist myself, I don't mind being compared to the Grinch. If I remember that wonderful story, the Grinch turned out to be a pretty good guy by the end of the story. And I'm certainly not try to "steal" his holiday. I'm not even sure how someone would go about trying to steal a holiday (although the christians themselves did a pretty good job of stealing christmas traditions from various pagan religions).

I'm also not miserable, and I don't know any of my fellow atheists and agnostics who are miserable either. Most of us lead quite happy and fulfilled lives. And I certainly don't want to make any religious people miserable (no matter what their religion), nor do any of my atheist brothers and sisters. In fact, I usually enjoy celebrating christmas. I just celebrate a secular version of it (with a tree, gift-giving, Santa, Rudolph, Frosty, etc.), although I usually call it the solstice season holiday or some similar secular term.

But celebrate this holiday season (which has been celebrated long before christianity came into being) any way you wish to, and I hope it makes you happy. The only thing I ask is that a person not try to force their religion on me and my family as we celebrate in our own fashion -- and that includes decorating government building with religious displays and symbols. Remember, atheists, agnostics, hindus, muslims, taoists, buddhists, and many other people paid taxes for those buildings and schools and other properties just like you did -- and they should not have to have your religious views forced on them, any more than you would want their views forced on you.

Just remember, we live in a secular nation with the guarantee of religious freedom -- which means all religions will be treated equally and none preferred by the government. And it also means we are guaranteed to be free of religion also, if that is our desire.

Celebrate to your hearts content. Decorate your home inside and out if you want -- and wish everyone a merry christmas. I hope you have a great christmas! But if someone wishes you a "happy holiday" or a wonderful "solstice season", just remember -- they are trying to be nice and wish you happy greetings. They are not declaring war on your beliefs or the way you want to celebrate this holiday.

The war on christmas doesn't exist -- and never has.
Posted by Ted McLaughlin at 12:00 AM