Fighting For The Little Guy 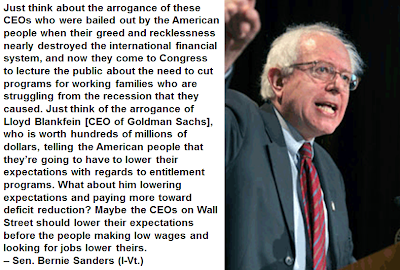 Independent Senator Bernie Sanders of Vermont is the best friend the hard-working "little guy" in this country has. More than any Democrat or Republican, he fights for the people who worked hard all their lives and now must depend on Social Security and Medicare to provide some security for their "golden years". I wish all politicians had the passion and the will to fight for ordinary Americans that Bernie always shows.

And frankly, people like Lloyd Balnkfein (Goldman Sachs CEO) make me mad as hell. He is a millionaire many times over, and he will never have to depend on Social Security to buy his basic necessities (like millions of Americans do). But he has the audacity to tell us that the retirement age for Social Security should be raised to the age of 70 and benefits cut. How dare he! It may be easy to sit in an office and issue orders to the real workers until age 70 (like he does), but there are many millions of people in this country who do real back-breaking labor to eke out a meager living -- and the idea of forcing them to continue that when they are 68 or 69 is just stupid and mean.

He says people are living longer today, and that is probably true for people like him who don't have to lift a finger to earn a living. But it is not true for the millions who work hard at dirty jobs every day. These people need Social Security to be left just as it is. And that could easily be done, if the cap on FICA taxes was raised or eliminated -- so that rich people like Blankfein paid the same percentage that real workers have to pay.
Posted by Ted McLaughlin at 12:00 AM