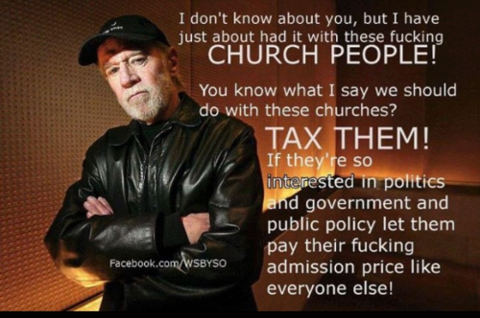 On October 7th, about 1500 christian preachers and ministers preached politics from their pulpit. They told their congregations that their religion demanded they vote for a particular candidate and party in the upcoming election (Romney and the Republican Party). But it was not important what party they were supporting. What was important is that they knew they were braking the law, and they did this intentionally. They are theocrats, who want their own religious views written into our nation's laws, and they want the Supreme Court to declare the law preventing them from proclaiming their politics from the pulpit to be overturned.

And what has out government done to these law violators (many of whom sent the IRS proof of their law-breaking)? Nothing. Not a single thing. The law says they should lose their tax-exempt status if they preach politics from the pulpit, but the IRS has taken no action against these intentional lawbreakers. It looks like the government is afraid to anger christians by removing the tax-exempt status of these churches -- even though polls have shown that a large majority of Americans think churches should not preach politics.

Since the government will not take the appropriate action to uphold the law, the Freedom From Religion Foundation has filed suit in federal court against the Internal Revenue Service. They are demanding that the IRS be ordered to do its job and uphold the law. The suit claims that the inaction by the IRS is a violation of the constitution. They claim that by not taking action against these churches, the IRS is giving preferential treatment to those churches that it does not give to other tax-exempt organizations.

They are right. Tax-exempt organizations (including churches) are given a special privilege by not having to pay taxes. It is not wrong to expect them to follow a few simple rules, one of them being to avoid electioneering, to keep that tax-exempt status. And if they want to be involved in politics, then they should pay for that privilege by paying taxes -- just like individual citizens and other organizations (that are not tax-exempt) must do.

These lawbreaking preachers are betting the current conservative Supreme Court will be on their side. I don't think so. In any event, it is the duty of the government to enforce the laws that Congress has passed. These preachers are wrong to break the law -- and the IRS is wrong to not enforce the law.
Posted by Ted McLaughlin at 12:02 AM