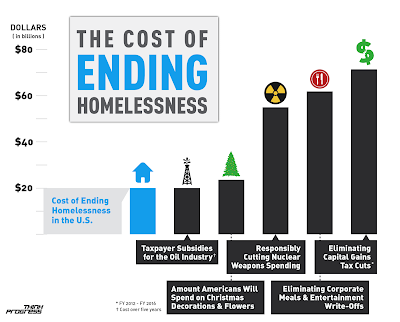 Outside of the number of people experiencing food insecurity in this country, perhaps the most shameful thing is the number of homeless people. A survey a couple of months ago reported that there are at least 1,000,000 homeless school children in the United States (and of course, that doesn't count the adults or the children too young for school). But as large as this problem is in this richest of countries, we hear very little about it (since these people have no political power, and the media would rather report about violent crimes and lying politicians).

But worst of all, it's a problem that we could fix if we just had the political will. It has been estimated that it would take about $20 billion to solve the homeless problem. That's a lot of money, but we blow far more on ridiculous things like unnecessary wars and tax cuts for the rich. In fact, that about the same amount we spend giving unnecessary subsidies to oil companies that are already making record-breaking profits. And it's less than we spend as a nation on christmas decorations each year.

The chart above shows several solutions to find the money -- like responsibly cutting spending on nuclear weapons, eliminating corporate wrote-offs for meals and entertainment, and eliminating the tax cuts of capital gains (which should be taxed at the earned income rate anyway). Doing any of these three things would raise more than twice the money needed to fight homelessness (and doing all three would raise plenty of money for job creation).

Don't believe the politicians when they say we don't have enough money to fight homelessness. We have plenty of money. We just lack the political courage and will.
Posted by Ted McLaughlin at 12:02 AM