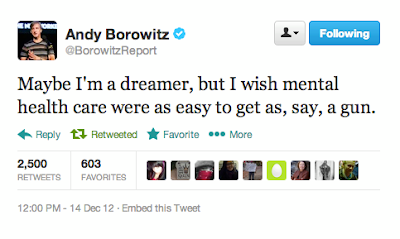 Andy Borowitz is one of the funniest satirical writers in America today, but I'm having a hard time working up a smile for this statement of his. That's because it strikes way to close to the truth. It is far easier to get a gun in this country than to access needed mental health care -- and far too many people that need care fall through the very large cracks in the seriously underfunded mental health care system in the United States.

According to the non-partisan and non-profit organization called the Center for Public Policy Priorities, the average amount of money spent on mental health care in this country is a paltry $109 dollars per person -- and some states do far worse than that. Here in Texas we finish dead last in mental health care funding (51st when D.C. is included) with an embarrassing $36 spent per person. Texas should be spending much more, since it is known that while mental illness strikes all levels of society it is more prevalent among the poor (who face greater stress in their daily lives) -- and the state has the biggest percentage of uninsured people of all states, one of the largest rates of poverty in the nation, and the greatest number and percentage of people working for minimum wage or less (with the average salary of the bottom 20% being only $11,307).

Some of this underfunding of mental health care could have been fixed by extending Medicaid to cover many more of the poor (as the Affordable Health Care Act tries to do). AHCA (commonly called Obamacare) mandates more spending in addition to more coverage. But the governor (with the acquiescence of the GOP-dominated legislature) has refused to institute the new Medicaid coverage in Texas -- even though the funds the state would receive would more than cover all of the cost of doing so. In addition, the legislature cut $25 million dollars from an already underfunded mental health care system in the last legislative session -- and it is likely they will cut even more in the upcoming legislative session.

While Texas deserves to be picked on for this obvious disregard for citizens with mental health care problems, it is far from alone in showing a lack of regard for the mentally ill. Remember, the national average spending was about $109 -- which means there are a lot of other states spending less than the national average. And I would wager that most (if not all) of them are high poverty and low-wage states with GOP leadership -- and extremely easy access to guns.

Now most of the mentally ill are not dangerous to their fellow citizens. The dangerous ones are only a tiny minority. But all of the mentally ill deserve the chance to receive adequate treatment, with which most of them can live useful and productive lives -- and we should all be ashamed for denying them that opportunity. And if we keep ignoring those few dangerous ones, we must expect they will continue to get weapons (because it is just too easy to do so), and a few will kill their fellow citizens. It only takes one person to snap and kill many others.

Why do we have this untenable situation -- where access to guns is easy and access to mental health care much more difficult? Because there is a lot of profit to be made in selling guns, and the gun makers (and the NRA) pay a lot of lobbyists to protect those profits. But providing mental health care costs money, and those with a mental illness (especially among the poor) don't have an army of lobbyists in Washington or the state capitols. That means, in our current system of government, they get ignored.
Posted by Ted McLaughlin at 12:06 AM