The GOP Is Tarnishing Its Own Image 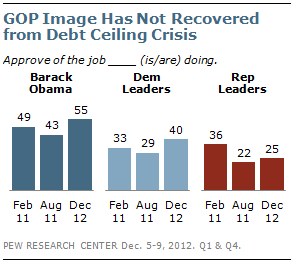 The Bush administration, without a doubt, hurt the image of Republicans. While talking about "compassionate conservatism", Bush turned out to be one of the least compassionate presidents of our modern era. His administration increased poverty, oversaw the outsourcing of American jobs to low-wage countries, deregulated Wall Street (letting them abuse consumers), started two unnecessary wars, gave large tax cuts to the rich (and smaller cuts to the middle class), allowed corporations to pollute our environment, and created the most severe and lasting recession since the Great Depression. His presidency was a disaster.

But the current Republican Party can't blame Bush for their current problems, because they took that tarnished party reputation and made it even worse. Note in the chart above, from a survey done by the Pew Research Center between December 5th and 9th, the Republicans actually had a more favorable view from Americans than congressional Democrats did. The congressional Republicans were viewed favorably in February of 2011 by 36% of Americans, while the congressional Democrats were viewed favorably by only 33%.

The GOP could have improved that view by compromising and working with Democrats to improve the economy and create new jobs (which is what the American people wanted to happen). But the GOP chose a different path -- blocking all the president's jobs bills (and nearly everything else he proposed). Their obstruction, especially concerning the debt ceiling, did not make Americans think better of them. In fact, their favorability rating had dropped 14 points by August of 2011 (and was only 22%) -- turning their 3 point advantage over the Democrats into a 7 point deficit.

Since the election, their numbers have rebounded by 3 points, but that pales in comparison to the 11 point jump Democrats have shown (and the 12 point improvement of President Obama). Now the congressional Democrats have a 40% favorability rating, while congressional Republicans are still mired in the mid-twenties (25%). But it seems the Republicans have learned nothing from their reputation-tarnishing adventure of last year (refusing to raise the debt ceiling, resulting in U.S. bonds being rated lower by Wall Street). Now they are ramping up for another fight over the debt ceiling -- in an attempt to get the president to raise the eligibility age and cut benefits for Medicare and Social Security, and cut all discretionary spending (help for the poor, money for roads and transportation, money for education, etc.), and let the rich keep their tax cuts.

This will not help their image with most Americans. Americans want the two parties to compromise for the good of the country and the economy. This same survey shows that 57% of Americans don't think the Republicans are making a serious effort to compromise with President Obama (and the Democrats) on the budget deficit -- while only 38% think the president is not negotiating in good faith. The Republicans will not be helped by continuing to obstruct presidential efforts to save the middle class tax cut (while eliminating it for the rich) and to address the budget deficit. 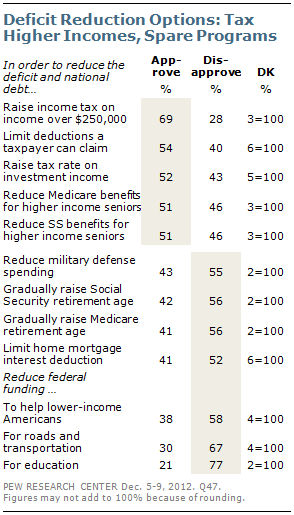