Obama To Keep Pressure On Republicans 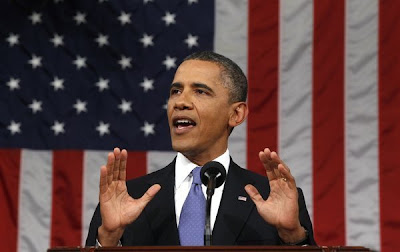 During his first term President Obama tried repeatedly to compromise and negotiate with the congressional Republicans. In fact, he did it so much that many liberals were beginning to lose faith in him. They supported his re-election, but for many of them it was only because the option otherwise was so devastatingly bad. Hopefully, he has now learned his lesson. At least he is talking like he has.

He gave a little more than I would have liked in the tax stand-off at the end of last year, but in the end the Republicans crumbled because they knew the president had the support of most Americans. Now he is facing a fight over raising the debt ceiling. The Republicans want to tie huge cuts (especially to Social Security and Medicare) to raising the debt ceiling, while the president has said he would not negotiate cuts on the backs of ordinary Americans.

And it looks like the president again has the support of a clear majority of Americans. A new ABC News/ Washington Post Poll shows that at least 58% of Americans believe the debt ceiling and budget cuts should be separate issues, and should not be tied together. Only 36% believe the issues should be tied together, as the Republicans are trying to do. If the president just stands firm, the Republicans will have to give in, or take the blame for shutting the government down and hurting the economy.

Then there is the issue of new gun laws and restrictions. The president is pressing forward with a bold but very reasonable agenda on this, and as a Pew Poll released recently showed, he again has the support of the American people for his proposals -- and the Republicans are trying to go against the grain of popular opinion.

And even if the Republicans survive those two fights with any of their reputation left intact, then the president has already lined up another fight with them. He want to reform immigration, and provide a path to citizenship for those undocumented workers who are still in this country. This is something else the Republicans oppose. And it is yet another issue where the president has public opinion on his side. A significant majority of Americans support a path to citizenship for deserving applicants.

It is looking like the president is lining up one fight after another to keep the pressure on the congressional Republicans -- and the Republicans are bucking public opinion on every one of those issues. They may be able to block much of what the president wants to do, since the Republicans do control the House of Representatives -- but doing so will not serve them well in the next election (now less than two years away).

I hope the president stands firm on these issues. He is in the strongest position he has ever been in, and even if he loses some of these fights, it could turn out to be a victory in the end by making the Republicans look bad going into the next election. The president has the public on his side, and he needs to use that. The time for compromise is over (and the Republicans wouldn't do it even if Obama tried it again). This is the time for political hardball, and I hope the president is ready to play that game.
Posted by Ted McLaughlin at 12:06 AM