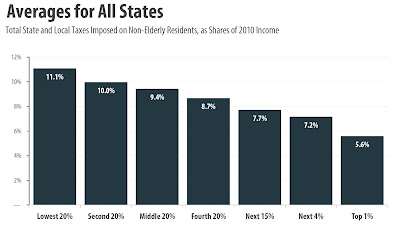 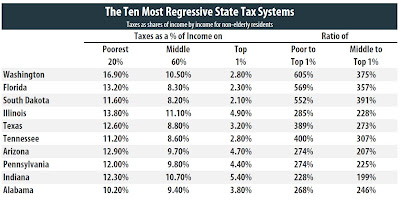 The Republicans would have you believe that the rich are forced to bear an onerous and unconscionable burden in taxes in the United States. Of course, they are only talking about national income taxes, where the rich are required to pay a larger percentage of their income in taxes -- because of the progressive nature of the income tax. It was decided long ago in this country that those who make the most should also pay the most, and most Americans think that is fair.

But the Republicans are lying, even when they talk only about the federal income tax. The rich and the corporations are not made to pay an unfair burden of taxes. In fact, the top tax rate for the rich is still much lower than at any time since World War II -- even though it was slightly raised by eliminating the Bush tax cuts for the richest Americans. That tax rate is only 39.6% for the richest Americans -- much lower than it has been in the past (at one time that top rate was 90%).

But one discussion the Republicans don't want to have is about their favorite kinds of taxes -- the taxes on consumption (like sales taxes) and property. These taxes make up the biggest share of state and local taxes -- and they are very regressive, making the poor and the middle class pay a much larger share of their income in taxes than the rich have to pay (or the corporations).

And it gets even worse in the states with the most regressive taxation (the bottom chart shows the ten most regressive states). Note that in those states most of the rich pay only about 2% to 4%, while the poorest citizens of those states all have to pay double-digit percentages. The Republicans think that is fair, because they only represent the rich and the corporations with their economic and tax policies. But it is not fair -- not now or in the past, nor will it be in the future. It can never be considered fair for the poorest Americans to have to pay the largest percentage of their income in taxes, nor for the middle class to pay a much higher percentage than the rich.

The Republicans claim to be the party of values, but there is something really wrong about values that would punish the poor through taxation while letting the rich off the hook. That looks more like theft than any value to me -- the theft by the rich of the poor, and sanctioned by the Republican Party (whose primary value seems to be greed). That is not democracy. It is plutocracy.
Posted by Ted McLaughlin at 12:06 AM