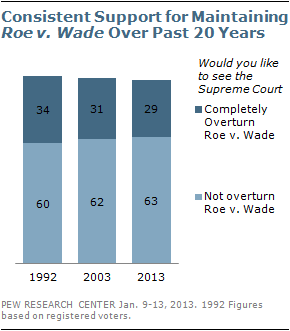 One of the main policies of the current Republican Party is opposition to the Supreme Court decision of Roe vs. Wade -- the decision that legalized a woman's right to choose to have an abortion (at least in the first trimester). They have not only made opposition to any legal abortions a federal issue, but Republicans have done the same on the state level -- passing numerous laws that chip away at a woman's right to choose. They seem to think this issue strikes a chord with the American public.

And if it ever was going to strike that chord, it should have done so by now. The Roe vs. Wade decision is now 40 years old. And in that 40 years, the fundamentalist right has done everything in their power to change the public's view of it. They have put out propaganda, made up lies, blockaded and bombed abortion clinics, vilified women seeking abortions, created "false-front" abortion centers, and even murdered doctors who perform abortions. Nothing has been too depraved for these people to try.

And it hasn't worked at all. These fundamentalist right-wingers would like to think that they are slowly bringing the public around to their way of thinking, but that is just not true. The support for the Roe vs. Wade decision is just as strong as it ever was. That's what the Pew Research Center found in its latest poll (done between January 9th and 13th of over 1500 registered voters).

Note the chart above. The support for Roe vs. Wade was about 60% in 1992. Eleven years later (2003) that support was 62%, and after another ten years (2013) it was 63%. Those figures are all within the margin of error of the poll (2.9 points), but they make it clear that the support has remained virtually constant for the last 20 years. The Supreme Court decision was and remains approved of by a significant majority of the American people.

And that support cuts across all demographic groups (age, education, race, sex, etc.). Only one group shows more people opposing Roe vs. Wade than supporting it -- the white evangelicals (where 54% want it overturned and 42% don't). Even Republicans are virtually split on whether it should be overturned (46%) or not (48%). Clearly, the Republican Party is not winning any new support by making this one of their main policy issues. here is the demographic breakdown: