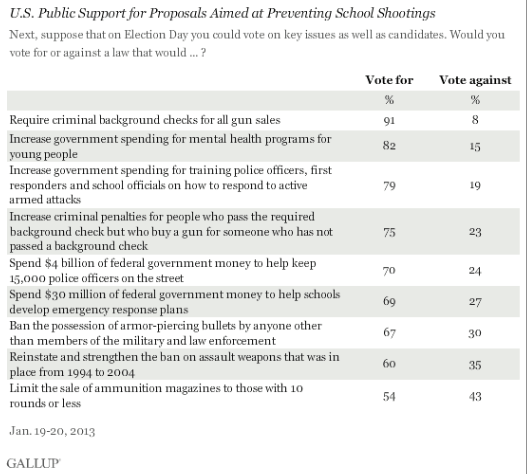 This is an interesting survey done by the Gallup Poll. Instead of asking what the poll's respondents want the politicians to do, Gallup asked what the people would vote for or against among President Obama's proposals if they could go to the polls and vote on them. Note that there is only one proposal that got less than 60% support. That was to ban the sale of ammunition magazines that could hold more than 10 bullets -- and even that proposal would win by 54% to 43% (with that 11 point difference being more than the margin of error of the poll).

The point is that the president's proposals have a lot of support among the American populace, and if they could, the public would vote them all into law. Doesn't it make you wish Congress was as smart as the general public?

This Gallup Poll was taken on January 19th and 20th of 1,013 random nationwide adults (and has a 4 point margin of error).
Posted by Ted McLaughlin at 12:08 AM