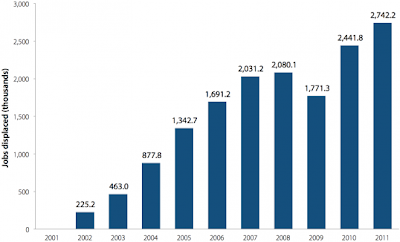 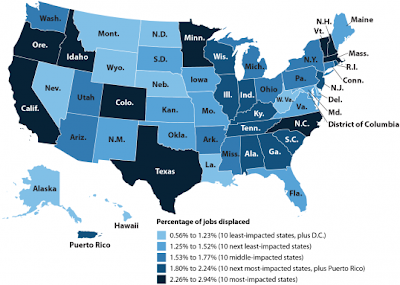 When China was allowed to join the World Trade Organization, Americans were told that the United States would benefit from it by opening up Chinese markets to American goods (thus creating more jobs in the U.S. to produce those goods the Chinese would be buying). It hasn't worked out that way. In fact, there is a huge and growing trade imbalance with China (where imports from China far outweigh exports to China), and that imbalance is costing more and more American jobs every year.

The charts above, from the Economic Policy Institute, show the problem. The top chart shows the millions of jobs being lost to China and the bottom chart shows the states most impacted by those job losses. As you can see, the problem grows bigger with each passing year.

But there is another thing that has negatively affected trade with China -- the outsourcing of jobs from the United States to China by large corporations. These corporations have taken good-paying American jobs, mostly in the manufacturing section, and sent them to China where they can pay far lower wages -- and then import the goods produced back into the United States. In the final analysis, these corporations are not just outsourcing American jobs, when they import the goods they have made in China they are adding to the trade imbalance. Here's how the EPI puts it:

Foreign-invested enterprises (both joint ventures and wholly owned subsidiaries) were responsible for 52.4 percent of China’s exports and 84.1 percent of its trade surplus in 2011 (Ministry of Commerce, China 2012). Outsourcing—through foreign direct investment in factories that make goods for export to the United States—has played a key role in the shift of manufacturing production and jobs from the United States to China since it entered the WTO in 2001. Foreign invested enterprises were responsible for the vast majority of China’s global trade surplus in 2011.

The crazy thing is that the American government has been a party to both the job losses and the trade imbalance. When the Republicans were in power, they made it possible for the companies outsourcing jobs to actually gets tax cuts to help them in their outsourcing of jobs -- and those tax advantages for outsourcing still exist. And even though it has become obvious that this outsourcing is seriously hurting the American economy, the Republicans still support it -- having blocked Democratic efforts in the 112th Congress to eliminate the tax advantages for outsourcing.

The government has also failed to see that certain standards were met regarding workers -- allowing China (and the companies who outsource there) to abuse workers by paying poverty wages and giving no benefits -- thus undercutting American workers, and encouraging more outsourcing.

The fact is that the Republicans don't want to solve this growing problem. They represent the corporations, and the corporations love the ability to outsource (and get tax breaks for doing it). And as long as the corporations are happy, the GOP couldn't care less what happens to the rest of America. They are still invested in their failed "trickle down" theory -- that what is good for the rich and the corporations is good for everybody. They ignore the fact that the policy has increased poverty, destroyed jobs, is shrinking the middle class, and has resulted in the widest gap in wealth and income between the rich and other Americans since before the Great Depression.

We must do something about this something that will stop the outsourcing, even the balance of trade, and stop currency manipulation. The first step would be to kick more Republicans out of office and flip the House of Representatives. Then pressure must be put on Democrats to eliminate the tax advantages for outsourcing, punish the companies that continue to do it (if necessary by putting tariffs on goods to make up for wage abuses), to strongly support worker unions, and to create more jobs in this country.

This problem is not going to rectify itself. We must demand and vote for real change.
Posted by Ted McLaughlin at 12:04 AM