Are You An Atheist ? 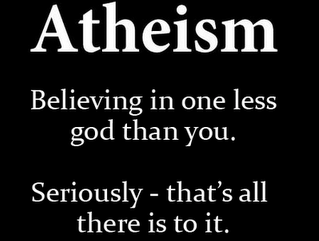 That may sound like a silly question to some. After all, it is assumed that people will know whether they are an atheist or not. But that is not necessarily true. Some people may think there is a set of beliefs that atheists must adhere to, but that wrong. Atheism is simply a lack of beliefs in gods -- nothing else is required.

Recently, my fellow blogger (vjack at Atheist Revolution) wrote an excellent post he called "How To Know If You Are An Atheist". I thought it was very good, so I am reposting it here:

Even if we understand the meaning of atheism, it is not always easy for someone brought up in a religious family or culture to acknowledge that he or she might be an atheist. Such an individual may have been raised to believe that atheists are evil and that it is not possible to be a good person without faith in some sort of god(s). In short, there may be many psychological barriers that could prevent someone from wanting to acknowledge that he or she may be an atheist.The good news is that it is fairly easy for you to figure out whether you are an atheist. By the end of this post, you will know if you are an atheist. What you choose to do with that information is up to you.Do You Believe in God(s)?Theism refers to the belief in some sort of god or gods. Theistic belief, or what some refer to as the theistic claim, refers to the proposition that some sort of god or gods exist. A theist is someone who accepts this claim (i.e., a theist is one who believes in a god or gods).The atheist does not accept the theistic claim. That is, an atheist lacks the theist's belief in god(s). The question of atheism vs. theism is not about certainty. The person who thinks it is possible but unlikely for some sort of god to exist is still an atheist. The person who somehow has never heard of any sort of god is an atheist. How can this be? Such an individual lacks theistic belief. Without theistic belief, one is by definition an atheist.So how do you know whether you are an atheist? Ask yourself the following question:


Do you believe in some sort of god or gods?

If you answered "yes," you are not an atheist but a theist. You believe in god(s), and that makes you a theist. If you answered anything other than "yes," you are an atheist. You may prefer a different label, but you are in fact an atheist. You do not accept the theistic claim. Wait a second! What if you aren't sure what you believe? What if you answered "I don't know" or something similar? You are confusing the question of what you believe with the question of how certain you are in your belief. These are separate questions, and only one of them has any bearing on whether you are an atheist. If you are not sure whether you believe in god(s), you lack god-belief and that makes you an atheist. The question was not whether you are 100% certain that god(s) exist; it was whether you believe in god(s). How certain you are of your belief is a different question.But What About Agnosticism?There are many misconceptions out there about atheism and agnosticism. They are not actually alternative positions at all; they are answers to different questions. For example, I am an agnostic atheist. This means that I lack god-belief but make no claim that gods cannot possibly exist. For the more visually-oriented, this diagram might help. As you can see, agnosticism is not an alternative to atheism. It can even be a complementary position.Here's another way to look at it…imagine someone who maintains that they are not even remotely sure whether they believe in god(s). Perhaps they've never bothered to think about it at all. One thing is undeniably true of such a person: they do not accept the theistic claim, at least not yet. They are an atheist. Should they change their mind at some future time and accept the claim, they would be a theist. Until that happens, they are an atheist.Now What?If you found out that you are an atheist, what's next? That is up to you. You certainly do not have to tell anyone if you do not want to. I know it can be difficult to acknowledge that one no longer believes in gods. It took me a couple of years to come around. What I can tell you is that there are many great people out there who happen to be atheists and who are nearly always thrilled to meet another atheist. If you have local atheist groups, consider checking one out. And if not, there are plenty of us active on the Internet.
Posted by Ted McLaughlin at 12:02 AM

Email ThisBlogThis!Share to TwitterShare to FacebookShare to Pinterest
Labels: atheism