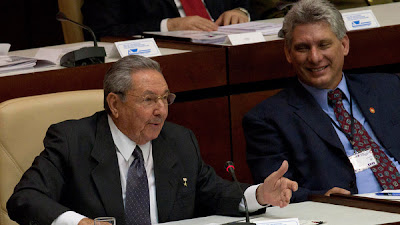 Raul Castro, the current president of Cuba, has said several times in the past that he believes those holding that office should limit their term in office to two five-year terms. Now it looks like he is going to practice what he has been preaching. On Sunday, the 612 deputy Cuban National Assembly chose Mr. Castro to serve a second 5-year term as president (which starts immediately).

Raul Castro took the opportunity to tell the National Assembly (and the Cuban people) that it would be his last term. He said he would leave the office in 2018 (when he would be 86 years old). At that time the Cuban presidency would pass to a younger generation -- to someone who was not a part of the 1959 revolution that kicked out the dictator Bautista and established to current communist government.

And it looks like that future leader may have been chosen. The National Assembly also replaced an 82 year old First Vice-President with a younger man. They chose 52 year old Miguel Diaz-Canel (shown above with President Castro) to be the First Vice-President (the person who would step in if Raul Castro was unable to complete his new term as president). Diaz-Canel is an electrical engineer, who has steadily rose within the party ranks. Many see this appointment as him being the chosen successor to the presidency.

Of course, 2018 is five years away. Things could change between now and then. There could be someone else to rise to the status of being possibly chosen as successor to the Castro's. But I wouldn't bet against Diaz-Canel. At any rate, it will be interesting to see what happens in Cuba in 2018 -- and the direction the new leader will take.
Posted by Ted McLaughlin at 12:02 AM