Corporatism And The Major Media 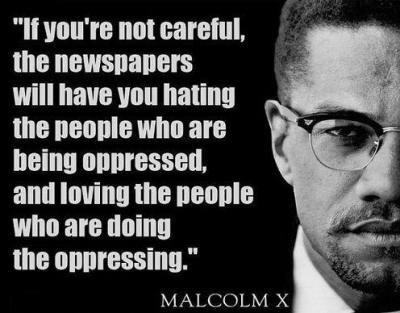 This is a very perceptive statement by the legendary Malcolm X. Here in America, we like to think that our major news media are independent organizations whose only interest is in bringing the truth to the masses. That is no longer true (if it ever was true). Newspapers, radio stations, and television stations and news organizations are not owned by the powerless and oppressed -- they are owned by the rich and powerful, the oppressors. And naturally, they censor the news they present to make those in power look better than they probably deserve.

This is not to say that no real news gets reported. Only that the presentation of that news is slanted -- from outright propaganda to slightly altered to not anger owners. We always need to know and understand who owns the major media in this country, because by knowing this you can better understand how the news is being slanted as it gets reported to you. There is a reason why the corporations have been able to slowly take over our government and pervert it to favor them. It is because they own the media.

In the years following World War II, corporations and Wall Street did very well in this country in spite of being regulated and paying their share of taxes. But they wanted more. They wanted a return to the years before the Great Depression, when corporate power was unrestrained and they could abuse workers to make not good profits, but obscene profits. And they were smart. They bought up the major media in this country, so it could no longer be used to illuminate their excesses. And it worked. Once they owned the media, there was nothing to keep them from buying the government.

And now we see the very thing that Malcolm X warned us about. The oppressed are demonized and the oppressors are deified.
Posted by Ted McLaughlin at 12:06 AM