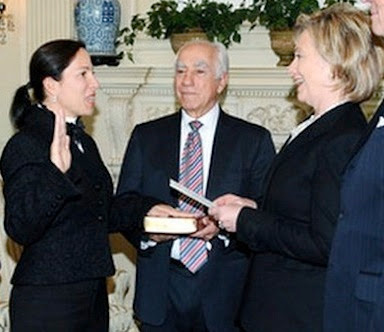 The picture above shows Hillary Clinton swearing in Eleni Tsakopoulos-Kounalakis as the American ambassador to Hungary (in January of 2010). The gentleman in the middle is Angelo Tsakopoulos, the father of the ambassador. Mr. Tsakopoulos is one of the biggest developers in California (after immigrating to the U.S. in his teens as a poor man). He is also one of the biggest Democratic donors, and says he is a friend of the Clinton family.

Mr. Tsakopoulos told the Greek Reporter (an American newspaper covering the Greek community) that Hillary Clinton WILL run for president in 2016. He said, "Hillary will be our next president and she will be a great one." Tsakopoulos said he had talked with former-President Bill Clinton, and Clinton assured him that Hillary will be a candidate for president in 2016. He also said that his daughter, who raised more than a million dollars for Clinton in 2008, would continue to serve as ambassador for another three months -- and then would return to the U.S. "to help elect Hillary as president".

I think Mr. Tsakopoulos probably spoke out of turn, but I believe him. It would make sense that Bill would be quietly lining up donors for Hillary's run in 2016 -- although I doubt that either of the Clinton's probably wanted any announcement made this early. Even if Hillary is laying the groundwork for a run in 2016, it would serve no purpose to make any kind of announcement. It would just make her a target for the GOP and other right-wingers for the next couple of years.

I doubt this comes as any kind of surprise to anyone though. I think nearly everyone in America who has a political opinion (in either party) believes Hillary will run in 2016. Don't expect any verification from Hillary though. She needs to have some deniability for a while longer (while she lines up donors and supporters). Still, it is kind of exciting to hear this from someone who might actually know something.
Posted by Ted McLaughlin at 12:02 AM