Executions Are Becoming Rare In U.S. 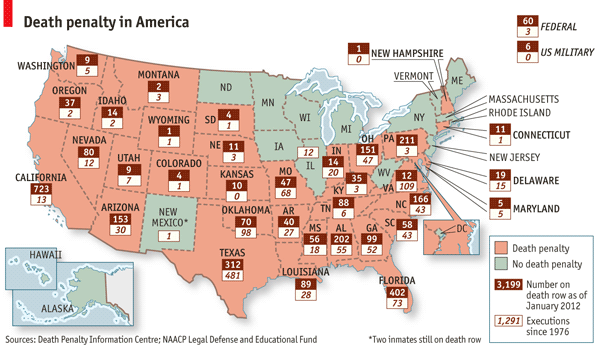 I was intrigued by the numbers in the white blocks of each state -- the number of executions that the state has carried out since 1976 (when the constitutionality of the death penalty was clarified). Note that only 9 states have averaged at least 1 execution per year in the last 36 years (Texas-481, Virginia-109, Oklahoma-98, Florida-73, Missouri-68, Alabama-55, Georgia-52, North Carolina-43, and South Carolina-43). The other 41 states have averaged less than 1 execution each year -- most of them far less than that.

And only four states have averaged at least 2 executions each year (Texas, Virginia, Oklahoma, and Florida). The fact is that executions are becoming more rare in this country with each passing year. Even in Texas, which has carried out a third of all executions since 1976, the number of death penalties given by juries and carried out by the state has dropped sharply in the last few years.

This brings up an interesting question. As the death penalty becomes more rarely used in the United States, how rare will it have to be before it is deemed to have become a "cruel and unusual" punishment (which would make it unconstitutional)? It is already used less than once per year by four-fifths of the 50 states. How much lower must it get before reaching the definition for "cruel and unusual"? Can only four states carry the burden of keeping it constitutional?