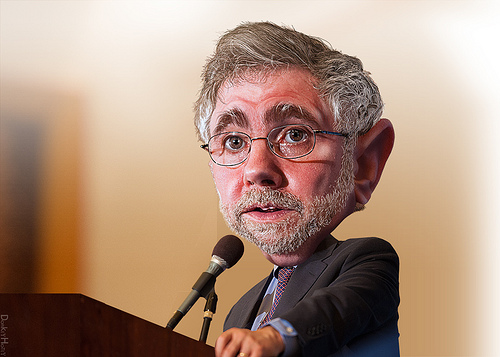 (This caricature of Paul Krugman is by DonkeyHotey.)

Republicans don’t care about the deficit. They care about exploiting the deficit to pursue their goal of dismantling the social insurance system. They want a fiscal crisis; they need it; they’re enjoying it. I mean, how is “starve the beast” supposed to work? Precisely by creating a fiscal crisis, giving you an excuse to slash Social Security and Medicare.
The idea that they’re going to cheerfully accept a deal that will take the current deficit off the table as a scare story without doing major damage to the key social insurance programs, and then have a philosophical discussion about how we might change those programs over the longer term, is pure fantasy. That would amount to an admission of defeat on their part.

Those are the words of Nobel Prize-winning economist Paul Krugman -- and he is exactly right. The Republicans don't care about federal budget deficits. Note that they were happy to help the Bush administration take a budget surplus (left by President Clinton) and turn it into a huge budget deficit -- mostly by giving the rich huge tax cuts and starting two unnecessary wars that were paid for by borrowing. They didn't have a problem with the deficit then. It was only after an African-American Democrat was elected president that they suddenly became concerned about the deficit.

And they still don't care about it. They know that significant job creation (which they oppose) would increase government revenues and take care of the deficit. But they don't want that. They want to use the deficit as a scare tactic -- to get rid (or at least hurt) two programs they have never liked (Social Security and Medicare/Medicaid). They voted against these programs when they were proposed, and they have tried to dismantle both by privatizing them.

Those efforts have not worked, so now they are trying to make significant cuts to both. They know the American people like both programs and don't want them cut. So they have engaged on a campaign of lies to scare the people into believing that we have a crippling budget deficit -- that can only be fixed by making huge cuts to Social Security and Medicaid. They completely ignore the fact that Social Security has paid for itself and not added even a penny to the deficit, while Medicare has not added as much to the deficit as GOP tax cuts for the rich, subsidies for the corporations, and bloated spending on the military budget.

The Republican concern over the deficit is disingenuous at best. Don't let them get away with using this false fear over the deficit to cut Social Security and Medicare/Medicaid. These two programs work exactly as they were designed to work, and are supported by over 80% of Americans. In fact, we don't need more spending cuts at all. What we need is for the rich and the corporations to pay their fair share in taxes.
Posted by Ted McLaughlin at 12:04 AM