GOP Obstruction Is Alive And Well 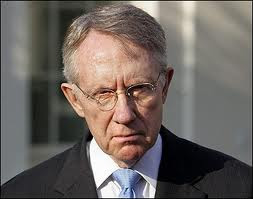 Majority Leader Harry Reid has a right to be mad -- at himself. At the beginning of the 112th Congress, Reid let himself be hoodwinked by Minority Leader Mitch McConnell. McConnell promised if Reid (and the Democrats) left the filibuster rules in place, the Republicans would no longer abuse the filibuster privilege. The Democrats left the rule as it was, and in almost no time at all the Republicans broke their promise. For the next two years they obstructed everything the Democrats tried to do by filibustering -- making it a requirement to have 60 votes before anything could be done.

As this 113th Congress was starting, Reid and the Democrats again had the opportunity to fix the filibuster problem. Proposals were made by some Democrats -- one would have required a real talking filibuster, and another would have reduced the cloture vote requirement each time a vote on ending any filibuster was taken. Either of those plans would have prevented filibuster abuse and obstruction of the Senate by abusing it.

So, what did Reid and the Democrats do? They let the Republicans play them for fools again. They accepted a "compromise" proposal that made only a few cosmetic changes to the filibuster. They surrendered their chance for change. Once again, the Republicans promised not to abuse the filibuster privilege. Now, only about three weeks later, they are breaking that promise.

Some Republicans, particularly Lindsey Graham (R-South Carolina), are filibustering the nomination of Chuck Hagel (a former Republican senator) to be Secretary of Defense. Mr. Hagel's nomination was approved by the Armed Services Committee, and should have been debated and voted on by the full Senate on Wednesday. But that could not be done because of the silent filibuster by Republicans. This means Hagel cannot be confirmed with only a majority, but will have to get 60 votes (the number of votes required to end a filibuster). That vote will be on Friday.

The reason (the lie) being given by Republicans is that the administration has not fully told the truth about Benghazi (where four Americans were killed). The truth is that this tragic incident has been fully explained by the White House, and again by Secretary of State Clinton in Senate hearings. The Republicans are just trying to keep the incident alive to score political points with their extremist base, and they are using the filibuster to do it.

Senator McCain and four other Republicans had promised they would not filibuster Hagel's nomination. According to CNN, they are now considering changing their minds and voting to sustain the filibuster -- and all it will take is for one of them to break their promise (since that will give the GOP 41 votes -- enough to keep the filibuster going). The leaders of both parties in the Senate say they don't know whether the filibuster can be broken or not.

The White House says they will not withdraw Hagel's nomination. That means if the Republicans vote in unison on Friday, it could be a long time before we get a new Secretary of Defense -- an inexcusable action in the midst of an ongoing war.

I blame Harry Reid and the Democrats for this. They could have changed the rules for the filibuster and prevented this from happening, but they let themselves be suckered by the Republicans again. Now we get to look forward to two more years of Republican obstruction. The Hagel nomination is only the beginning.

When are Senate Democrats going to get some decent leadership -- leadership that knows how to play the same kind of political hardball that the Republicans play?
Posted by Ted McLaughlin at 12:06 AM