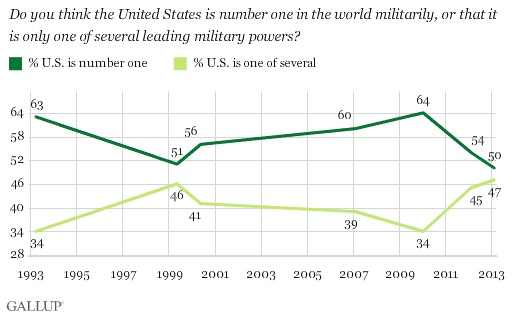 This chart is from a Gallup Poll (conducted between February 7th and 10th with a nationwide sample of 1,015 adults -- with a margin of error of 4 points). Frankly, I find the results of this survey shocking to say the least.

According to the survey, about 47% of the people in the United States does NOT think the United States is number one militarily in the world. If you considered the margin of error, that would be somewhere between 43% and 51% of the population -- still an incredibly high percentage even if we take the 43% figure. Here is how it breaks down politically (with the percentage shown being those thinking the U.S. is not the strongest military):

Considering what the United States spends on the military, I simply don't understand how anyone in this country can believe that. It shows a real disconnect with reality, and makes me wonder if the GOP has really been that effective with their fear  mongering and propaganda that our military needs more money just to survive.

The United States spends at least 45% of all the money spent on the military in the entire world. That's more than the next 15 biggest-spending countries combined (with the spending of all countries converted to U.S. dollars). We could cut our spending in half, and we would still be spending more on our military than any other country in the world -- ANY country, whether friend or enemy!

How can we possibly be spending that much on our military, and still not have the strongest military in the world? If that was true, we would have to have the stupidest military leaders (Pentagon) and the most incompetent military-industrial complex of any country (by far) -- and heads should roll.

The truth is that we have the best-trained and best equipped military in the world. And we would still have that even if we spent far less on our military. The people who believe we don't have fallen for the propaganda being churned out by the GOP (on behalf of their corporate masters), so they can spend even more taxpayer money to fatten the bank accounts of the corporations in the military-industrial complex.

It's just sad that so many Americans have fallen for that lie! The military budget needs to be cut significantly -- not increased.
Posted by Ted McLaughlin at 12:08 AM