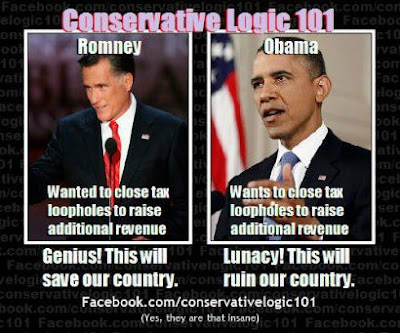 Logic is certainly not the right word to use when it comes to conservatives. As soon as President Obama was elected, what little logic they had flew right out the window. Conservatives, especially the teabagger variety, don't even bother to think policies and bills through anymore. They only look at who proposed that policy or bill. If a Republican proposed it then it is accepted, but if President Obama proposed it then it has to be bad in their view.

This is true even when the proposal is exactly the same. Obamacare was originally a Republican idea, and Romney was celebrated by conservatives when he got it passed in Massachusetts. But when Obama proposed the same program for the nation, conservatives acted like it was the worst thing that could possibly happen (completely ignoring the fact that it was their own plan originally).

The same thing is true of the idea to close tax loopholes so the rich would pay a little more. Romney proposed it during the campaign, and conservatives thought it was a great idea. They even campaigned on it. But after he was re-elected, President Obama proposed exactly the same thing -- closing tax loopholes to raise revenue (and he is even offering to let Congress decide what loopholes need to be changed). Only now the Republicans oppose the idea (again forgetting that it was originally their own idea).

I don't know whether this is just stupidity or overt racism. Maybe it is both (which wouldn't surprise me since the GOP has displayed plenty of both since President Obama was elected). But rejecting your own idea just because a political opponent finally accepts it is really weird. Shouldn't it be a cause for celebration when your opponent accepts your idea? Not for today's GOP! They must oppose everything the president does, even if he is agreeing with them or accepting one of their ideas.
Posted by Ted McLaughlin at 12:02 AM