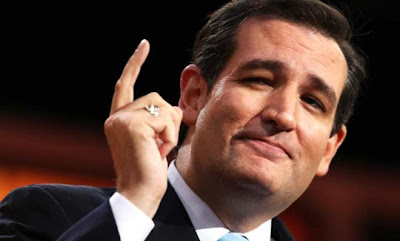 Texas has had some embarrassing senators -- from John Tower and Kay Bailey Hutchinson to its current senior senator, John Cornyn. But after being in office for only a little more than a month, Ted Cruz (pictured above) has set a new low for senators from the Lone Star State. He did it by questioning the patriotism of a man who spent his life in Cruz's own party. Cruz sits on the Senate Armed Services Committee -- the committee tasked with looking at the nomination of former Republican Senator Chuck Hagel to be the next Secretary of Defense.

Now I can understand why some Republicans might not approve of Hagel's nomination. Hagel has never been an extreme right-winger. Having been a decorated soldier who fought in Vietnam and knows first hand the horror of war, Hagel has questioned the necessity of the wars in Iraq and Afghanistan. He also thinks war must be a last resort, to be engaged in only after all other efforts have failed -- with countries like Iran and North Korea. And he understands that there are two sides in the Israeli/Palestinian conflict, and both sides must be listened to and considered.

A lot of Senate Republicans don't agree with Mr. Hagel, and I have no problem with them voting against him when his nomination finally reaches the Senate floor. But Cruz has gone much further. He crossed the line of political opposition, and has entered into character assassination by using baseless innuendo -- much like that done by another former senator, the odious Joe McCarthy. McCarthy needed no proof to label anyone he didn't like as a communist. Just making the charge was enough for him, and he ruined the lives of many innocent people with his baseless charges.

Now Cruz is engaging in that same type of character assassination making charges with any kind of proof to back them up. Chuck Hagel has always been a loyal American (whether you agree with his policy stands or not), and he was thoroughly investigated by the FBI after being nominated to be Secretary of Defense (as all nominees are investigated). And absolutely nothing was found.

But that didn't stop Cruz from wondering in committee whether Hagel might be on the payroll of a foreign power like North Korea or Saudi Arabia. Cruz had no evidence that anything like that might be true. He just tossed out the charge to smear Mr. Hagel. And it was an inexcusable breach of senate ethics and decorum -- so much so that he was called on it by Senators Nelson (D-Florida) and McCain (R-Arizona). More needs to be done. At the very least, Republican Senate leaders need to take Cruz aside and read him the riot act -- because if he is allowed to continue with this kind of behavior, it will reflect badly on both the Senate and the Republican Party (not to mention the state of Texas and the nation).

The days of Joe McCarthy were a dark time in senate history, and in the history of this nation. We don't need another Joe McCarthy -- even if that would make some sick teabaggers very happy.
Posted by Ted McLaughlin at 12:04 AM