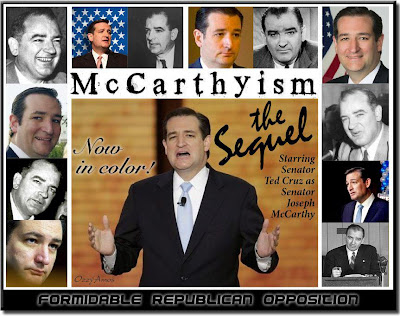 Back in the 1950s, Senator Joseph McCarthy ruined the lives of a lot of innocent people by using his position in the Senate to make baseless accusations. He accused people of being communists, even though he had no proof of his charges. He knew that an accusation was enough, especially if made by a senator, and that too many foolish people would believe his undocumented charges. It was a dark time in this nation's history -- a time ruled by fear rather than reason.

McCarthy was eventually censured and shamed by his fellow senators -- after being embarrassed on nationwide TV by a lawyer for the Army named Welch. The nation slowly healed, and it seemed that we had learned our lesson -- that we would never allow another person to perform those same kinds of shameful acts performed by McCarthy.

But we might have been wrong. It seems there is a new McCarthy incubating in the United States Senate -- Ted Cruz of Texas. This teabagger started out by accusing Secretary of Defense nominee of receiving money from foreign governments like Saudi Arabia and North Korea. Cruz had no evidence that was true, and in fact, a thorough investigation of nominee Hagel by the FBI showed no improprieties at all.  But that didn't stop Cruz from throwing out the accusations as a "possibility".

Now we learn that this is not the first time Cruz has made false and scurrilous accusations against innocent and patriotic Americans. Speaking at a right-wing fundraiser not long ago, Cruz told the crowd that when he attended Harvard Law School (he graduated in 1995) there were at least 12 professors there that believed in marxism and the violent overthrow of the United States government.

This immediately brings up the question -- Why didn't he turn those professors in to the FBI? Supporting the violent overthrow of the government is a serious crime in this country, and if the charge was true those "marxists" would have been arrested and tried. But it was not true -- and Cruz knew it was not true. But he also knew this is the kind of ridiculous thing that right-wing extremists want to believe, so he told them it was true -- just to win their favor.

It is time for the Republican leadership in the Senate (and in the party) to have a serious discussion with Cruz and demand he stop this kind of abhorrent behavior. It is one thing to propose and support policies that will damage the country (as the GOP is doing), but it is far worse to use an elected position to make false accusations against Americans. That kind of reprehensible behavior simply cannot be tolerated.
Posted by Ted McLaughlin at 12:04 AM