The Second Amendment Is Not Absolute 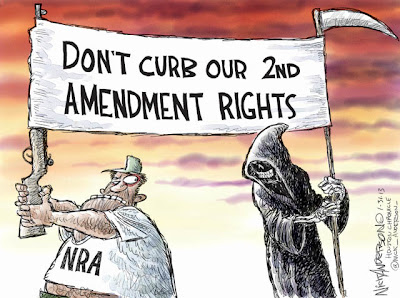 (The cartoon above is by Nick Anderson in the Houston Chronicle.)

It's become obvious that the gun laws in this country are too loose. Whether we want to admit it or not, we've known that for a while now. But the tragedy in Connecticut has finally spurred people to take some action, and see if we can't restrict the types of weapons available and the people who shouldn't be allowed to buy or own weapons.

But the gun nuts are going crazy at the thought of that -- and they are trying to use the Second Amendment to shut down debate and action on new gun restrictions. They would have us believe that the Second Amendment is an absolute that would prevent new and reasonable gun restrictions. That is a lie. The Second Amendment is not an absolute. The Supreme Court has already ruled that Congress has the authority to ban military-style assault weapons, and that all levels of government have the right to limit who can own a firearm and where they can possess that firearm.

One of the better posts I have read on this subject was written by fellow blogger, Badtux the Snarky Penguin. Here is what he had to say:

“The most stringent protection of free speech would not protect a man falsely shouting fire in a theater and causing a panic.”
Those are not my words. Those are the words of U.S. Supreme Court Justice Oliver Wendell Holmes in his majority opinion in the Supreme Court caseSchenck v. United States(1919). While the scope of the Schenck decision was later restricted somewhat by Brandenburg v. Ohio (1969), it is still the general case that with rights comes the responsibility to not use those rights in ways that injure others. When those rights are exercised in a way that injures others, you can be held legally liable for the damages that result. See “slander” and “libel” for other examples of limitations on the 1st Amendment right of free speech.
Furthermore, speech is regulated in other ways. If you wish to hold a rally and speak in a public park via setting up a sound system allowing you to reach more than a handful of people, for example, the majority of cities require that you get a permit. The purpose of this permit is to insure that your activities don’t interfere with other activities scheduled at the park that day and that you have made proper provisions for public safety and sanitation, as well as insurance to cover any injuries that occur as a result of the event. The Supreme Court has ruled that this is legal as long as the permit is granted without regard for the content of the speech and that the requirements do not have the fundamental effect of barring free speech.
So it’s clear that both common sense and the law hold that the rights enumerated in the U.S. Constitution are not unlimited. They are unlimited only insofar as exercise of these rights does not cause harm to others, and can be regulated to insure that your exercise of these rights will not cause harm to others. You cannot simply take a sound system to the park and in the middle of a soccer game start ranting about Jesus. That’s causing harm to the soccer players and parents who just want to engage in the enjoyment of their pasttime.
Yet when it comes to guns and the 2nd Amendment, the NRA holds that norestrictions on the enumerated rights are allowed. They point to the 1st Amendment and shout “would you accept restrictions on your 1st Amendment rights?” when in fact said restrictions do exist and have existed all the way back to the beginning of this nation. The nature of the restrictions change over time, for example Schenck imposed additional restrictions while Brandenberg loosened restrictions, but the fact that restrictions are needed in order to provide for public safety and order has never been contested when it comes to 1st Amendment free speech rights.
Yet when you talk about guns, a tiny subset of the 35% of Americans who own one or more guns insists that guns must have a position above free speech. Free speech has restrictions, but this tiny percentage of Americans insists guns must have no restrictions. 8% of gun owners belong to the NRA — that’s roughly 3% of Americans — yet this 3% waves around what 65% of Americans consider to be scary black rifles and shouts “from our cold dead hands!” and expects that to be a useful exercise? Nuh-uhn. That ain’t gonna do it. Just sayin’. Find a way to answer the question “how can I get the majority of Americans to support my right to own an AR-15 with a big magazine” and those of you who want to own an AR-15 with a big magazine might actually have something. Until then, you just look like a blithering blow-hard to the vast majority of Americans, who don’t own guns, are scared of guns, and aren’t willing to support the rights of the minority who do own guns as long as said minority frankly scares the crap outta them.

If you haven't been reading the musings of Badtux, then you should. He has a wonderfully snarky take on politics and society.
Posted by Ted McLaughlin at 12:02 AM