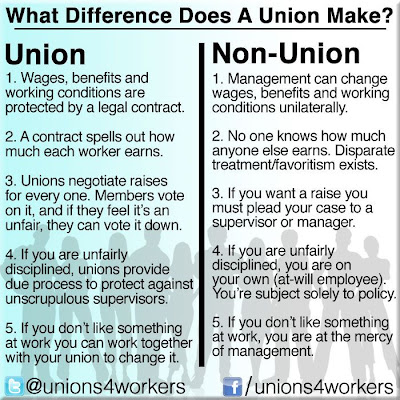 Too many Americans have bought into the corporate propaganda that unions are not needed in modern America. They think they can actually bargain on a one-to-one basis with a huge company and be treated fairly. That is simply not true. Corporations are not in business to be fair to their workers. They are in business to make as much profit as possible -- and if they can squeeze out a little more profit by abusing workers, they will not hesitate to do so.

There is only one protection that workers have -- the right to organize into unions. Using the power of all the workers as a group, that union is then able to bargain with the company on an equal basis. And many of the things we take for granted today (like the 40-hour workweek, paid vacations, paid sick time, safe working environments, the 8-hour work day, overtime pay, etc.) were not given workers out of the generosity of corporations or because government required them. We have them because they were bargained for by unions.

Unions protect worker rights, and unions are the primary reason this country developed a strong middle class. And as unions decline, so does the middle class and worker rights. That is just the way things work in a capitalist economy.
Posted by Ted McLaughlin at 12:00 AM