A "Baby Picture" Of The Universe 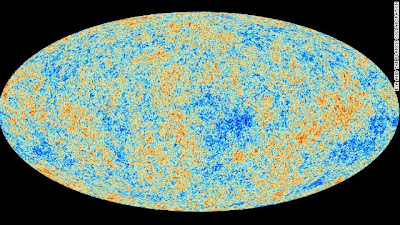 This new picture (artificially-colored) is a picture of the heat distribution of our universe when it was very young -- about 380,000 years after the Big Bang. That may sound like a long time, but it's not in terms of the age of the universe (about 13.8 billion years old). The blue areas are the coolest and the yellow and red areas are the hottest. Scientists say this new picture will allow them to understand more about how the universe developed -- and even reconstruct what it was like much closer to the Big Bang.

Let me make a comparison to illustrate just how young the universe was when it looked like this, by comparing it to a human life. Assuming a human life span of 80 years, this would be a picture of a baby at only 19 hours old -- less than a day old. So the above image is truly a "baby picture" of the universe, since it was actually still a "new-born".

Here's how CNN describes the picture:

This new photogenic moment, released Thursday, comes courtesy of the European Space Agency's Planck space telescope, which detects cosmic microwave background radiation -- the light left over from the Big Bang. Scientists used data from Planck to create an artificially colored map of temperature variations across the sky in the early universe, in more detail than ever before.
Posted by Ted McLaughlin at 12:04 AM