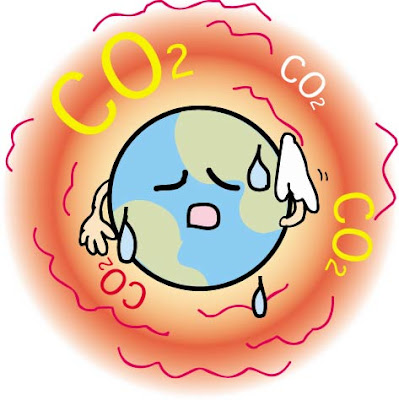 (The picture above is from the blog called The Orb of Knowledge.)

Global carbon levels increased each year by only 1 part per million in the 1960s. By the decade 2000 to 2010, it had risen to nearly 2 parts per million. In 2012, it was 2.67 parts per million significantly higher than any year except for 1998. But while 1998 could be attributed to a one-time spike in use of carbon fuels, it is different for 2012 -- because the new rise is due to more countries going online with more power plants using fossil fuels. The only thing that will bring it back down is to close many of these plants, and the chance of that happening is almost nil.

Why is it important that significantly more carbon-based fuels are being burned and dumped into our atmosphere? Because scientists agree that global warming must not exceed more than 2 degrees celsius by the year 2050 -- and this increase makes it far less likely that limit can be kept. To keep the temperature rise to only 2 degrees celsius, there should be no more than 565 gigatons of carbon in the atmosphere in 2050. But the acceleration of carbon being dumped into the atmosphere means we could reach that level by 2028 (22 years early).

That means that by 2050 we would be far past the tipping point -- the point at which global environmental disasters would be unavoidable. I wish I could say that most world leaders are finally getting serious about taking action to curb global climate change, but frankly, there is no evidence of that. There are yearly meetings on the issue, but little is actually being done.

It seems like every nation is worried that they will take action while other nations don't (thus giving those other nations an advantage by continuing to use cheap and dirty carbon-based fuels). And a couple of the worst offenders are the United States and China -- each of which continues to whine about the inaction of the other. And by doing this, both are abandoning their leadership in world affairs.

The truth is that if either nation would take unilateral action, most of the rest of the world would follow and a huge pressure would be put on the other power to fall in line. This would be especially true if the UNited States was the one that took unilateral action. Unfortunately, that doesn't look like it will happen. It would require our government to demand corporations and energy producers clean up their act. But too many of our elected officials have sold out to those interests (and the corporations think only of short-term profit, and have no interest in what the future will bring -- to themselves or the world).

Is this generation going to be remembered as the one that did serious and irrevocable damage to our planet? It certainly looks that way. We should all be very ashamed!
Posted by Ted McLaughlin at 12:02 AM