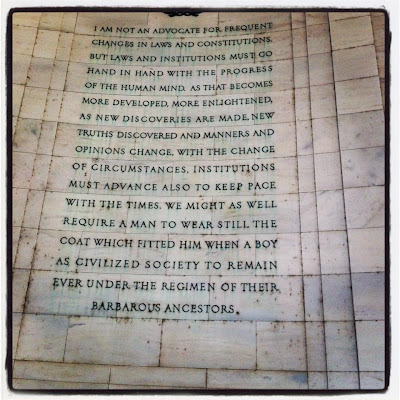 The ultra-right-wing Republicans that make up a majority in the modern Republican Party like to say quite often that we should not change the laws in this country, because that would violate the "original intent" of this country's Founding Fathers. That's pure hogwash. It's also a modern idea that they have come up with -- and not the thinking of those Founding Fathers. Those men who created this country did not believe they had all the answers, and they knew they could not predict the future. The words above (on the Jefferson Memorial) attest to that.

Those same right-wingers would feel us that America must not allow same-sex marriage (i.e., equal rights) because the Founding Fathers did not do that. The fact that those Founding Fathers lived in a much different world does not seem to matter to them -- or the fact that the opinions of most Americans have changed. In fact, several of the leading fundamentalist right-wingers (Mike Huckabee, Gary Bauer) have even threatened to leave the Republican Party (and start a third party) if the Republican Party changes its stance opposing same-sex marriage.

But those Republicans who want to live in the past have a growing problem. The majority of Americans have changed their minds and now support legalizing same-sex marriage -- and that change is occurring at an ever-faster rate, with remarkable change being recorded in just the last decade. It is as though a dam has burst, and the flood of public opinion in favor of granting equal rights (including marriage rights) to the LGBT community can no longer be held back.

Several recent polls have shown that a clear majority of Americans now want to legalize same-sex marriage. A recent CBS News Poll puts the figure at 53% in favor and only 39% still opposed. An ABC News Poll puts the figure even higher -- at 58% in favor of legalization and only 36% opposed. But the problem for the fundamentalists goes deeper than that. Not only is a majority of the general public now taking a position in opposition to them, but so is a growing number of the people in their own party.

The Republican leadership has already admitted that they must find a way to reach out to younger voters, and that many young people view the same-sex marriage issue as something they consider important in picking a party. With about three out of four young Americans (73%) supporting same-sex marriage, that does not bode well for the party in attracting more young people.

The Republican Party has a difficult decision to make. If they continue their rabid opposition to same-sex marriage, they face a dwindling party membership as the older generation dies off and young people choose to be Democrats. If they change and support same-sex marriage, they could face a party split as the fundamentalists bolt to form a third party. Neither choice holds much promise for Republicans, and that is their current dilemma. 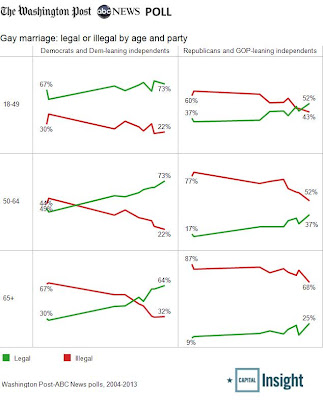