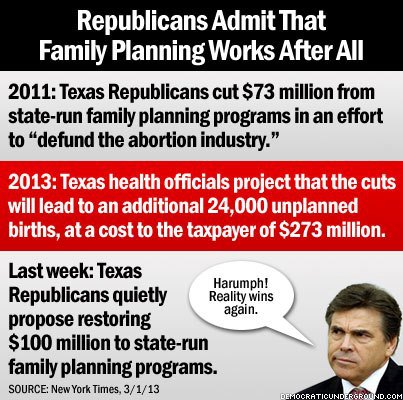 People throughout the developed world, and I believe most people in this country, believe access to decent health care shoould be a right of all citizens. That is not the view of the Republican-controlled government in Texas. Rick Perry and his legislative cohorts believe money and politics are much more important than health care for Texas citizens. For them, health care is something reserved for those who are rich, or have enough money to purchase health insurance.

Texas has more people without health insurance than any other state in the union -- both in sheer numbers and as a percentage of the state population (about 27%, or more than one out of four Texans). This should not surprise anyone, since Texas also leads the nation in both the number of and percentage of people who work for minimum wage (or less) in jobs that have no benefits.

So what did the legislature do in the last legislative session? They cut $73 million from women's health programs. They claimed it was to defund abortion, but that was just a lie -- since no state money went to fund abortions anyway. The truth was they were just trying to cut the budget without taxing the rich (who pretty much get a free ride in Texas). The effect of this huge cut in women's health care was the closing of over 50 women's health and family planning clinics.

But while the GOP legislators were patting themselves on the back about all the money they had saved, they were shocked to learn they hadn't really saved any money at all -- but instead saddled the state with an additional $200 million in expense. It turns out that the $73 million cut (that closed so many health and family planning clinics) will result in an additional 24,000 births to poor women in 2013-2014 -- costing the state an additional $273 million. Their "cost-cutting" turned out to be a very expensive screw-up. Now they are scrambling to add at least $100 million to women's health programs, in the hope of heading off at least some of the additional costs they created.

But that hasn't ended the GOP's playing games with the health of Texas citizens. Even though more than a quarter of the state's citizens have no health insurance, the GOP has recently said they still back the governor's decision to turn down $100 billion to expand the state's Medicaid program (and cover more than 1.5 million more people with insurance through Medicaid). And they are staring to get some flack over that idiotic decision.

A recent poll showed that a majority of Texans think the Medicaid program should be expanded. And the state's hospitals, and most of the business community, are now putting pressure on the legislature to reverse their decision and expand Medicaid -- which would be mostly paid for by the federal government, and would pump hundreds of millions of new dollars into the Texas economy. Once again, the legislature (and the governor) have made a decision they claim will save money -- only to have it turn out that the state will lose more than is gained by their decision.

The state GOP has now painted itself in a corner. They know they are making a huge mistake, but think they might not survive a GOP primary if they change their minds and do what is best for Texas. They are furiously searching for a way to save face while accepting the federal money. Some suggest that the feds just give them the money and let them design their own version of Medicaid. That is unacceptable. The federal government shouldn't give Texas a dime unless they are assured that Texas will completely abide by the national guidelines for Medicaid -- both in who can qualify and in amount of payments made to providers.

I don't expect Texas to expand its Medicaid program in this legislative session. Rick Perry is running for president again in 2016, and he thinks GOP teabaggers will oppose him if he gives in. He thinks Obamacare will still be an issue in 2016 that he can ride to the nomination. He's wrong, but that has never stopped him in the past.

In the next couple of years, we will see many of the GOP state holdouts changing their minds and expanding Medicaid -- but I doubt that Texas will be in that number. Here in Texas, the GOP cares a lot more about politics than the health of millions of Texans. That's sad, but it's true.
Posted by Ted McLaughlin at 12:04 AM