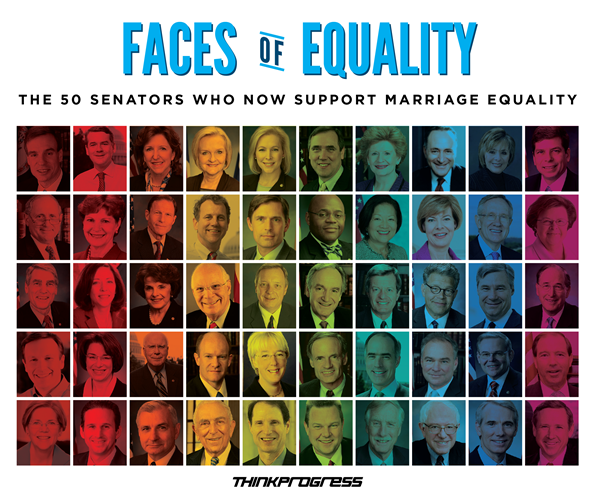 The pictures above (thanks to Think Progress) are of the 50 United States Senators that have now come out in favor of legalizing same-sex marriage. This marks the first time in this country's history that half of all senators hold that position -- and with the vote of Vice-President Joe Biden (who is also a supporter), that means the Senate now has a working majority supporting same-sex marriage.

This means that if the Supreme Court tosses out the current version of the Defense of Marriage Act (DOMA), no revised version would be able to make it through Congress. This is good news.

I'm sure the fundamentalists right-wingers will try to demonize these senators, and try to paint them as anti-christian or anti-marriage. That is ludicrous though. Even if same-sex marriage were legalized throughout the nation, no church or church official would be forced to recognize or perform those marriages. What this really means is that these 50 senators support extending equal rights to all Americans.

The latest senator to climb on board the equal rights bandwagon is Illinois Senator Mark Kirk. Kirk and Ohio Senator Rob Portman are the only two Republicans now supporting same-sex marriage. The other 48 are either Democrats or Independents (caucusing with Democrats). Here is what Kirk said in announcing his position this week:

“When I climbed the Capitol steps in January, I promised myself that I would return to the Senate with an open mind and greater respect for others. Same-sex couples should have the right to civil marriage. Our time on this Earth is limited, I know that better than most. Life comes down to who you love and who loves you back– government has no place in the middle.”
Posted by Ted McLaughlin at 12:02 AM