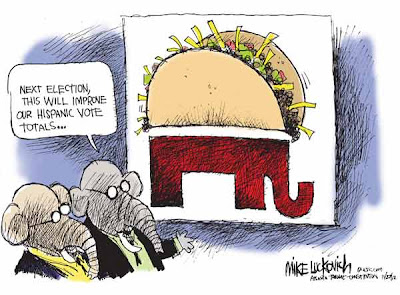 (The cartoon above is by Mike Luckovich in the Atlanta Journal-Constitution.)

The national Republican leadership got a wake up call last November when their party did so poorly in the election. And they have recognized, or at least said they recognize, that they must do a lot better job in appealing to minority voters (because with each coming election the minority voters will make up a larger percentage of the electorate, while the percentage of white voters will shrink). And the group they need to reach out to the most are the Hispanic voters, because Hispanics are the fastest growing group in America.

Now it would make sense to moderate not only their anti-minority rhetoric, but also those policies that tend to divide Americans. One of the biggest issues that would benefit the Hispanic community and possibly even get some of their votes, would be for the GOP to take an active role in passing immigration reform. A new NBC News/Wall Street Journal/Telemundo Poll shows that more than 80% of the Hispanic community considers that a very important issue.

But it is not the only issue. At least 70% would like to see stricter laws concerning guns. and a strong plurality of 41% think the recent sequestration cuts will hurt the economy (while only 30% think those cuts will help). Even if the Republicans do get on board with immigration reform (which is still in doubt), they will still be out-of-step with the Hispanic community on these two issues (and probably more).

But change is not going to come easy for the Republicans. Too many in their base (and in Congress) still consider ideology more important than than doing what is best for ordinary Americans, and they think they can keep their old attitudes and policies and reach out to the Hispanic community through a bit of tokenism. They think all they have to do is offer up a candidate like Senator Marco Rubio, and the Hispanic votes will flow in.

They are wrong. That same poll showed there is an opportunity for the GOP in the Hispanic community. When asked which which party would do a better job fixing the immigration problem, 37% said the Democrats and 11% said the Republicans (while the rest said both, neither, or not sure). But just offering up Rubio as a presidential candidate is not going to work. The poll also asked for favorable/unfavorable ratings on a couple of potential candidates:

If the 2016 election was held today instead, Hillary Clinton would crush Marco Rubio in the Hispanic community. Not because she is a Democrat, but because she is on the right side of issues the Hispanic community cares about. Rubio is not. He hurt himself by opposing the Dream Act last year, and may have done further damage this week by voting to filibuster the gun bill in the Senate (to keep it from even coming up for a vote). And frankly, there's still some doubt about just where he stands on immigration reform.

If the GOP thinks tempering their rhetoric a bit and offering up a Hispanic token candidate in 2016 will win them the White House, then they are sadly mistaken. Hispanic voters are just as smart as any other voters, and they will vote for their party that consider their interests important. Unless the Republicans swallow some pride and change some policies, they won't be that party.

NOTE -- This NBC News/Wall Street Journal/Telemundo Poll was taken of 300 randomly chosen Hispanic adults between April 5th and 8th -- and has a margin of error of 5.66 points.
Posted by Ted McLaughlin at 12:06 AM