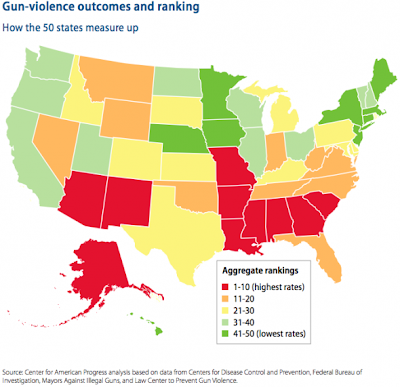 The NRA will hate this study and do their best to demonize it, and the congressional Republicans will ignore it to play to their base, but the results show the real truth -- gun laws do work to lower the number of gun deaths. And that is all President Obama and the Democrats are trying to do with their very reasonable and constitutional proposals to tighten gun laws -- namely, closing the loopholes in background checks so that everyone trying to buy a gun must get one, increasing the penalties for gun trafficking, and banning the sale of military-style assault weapons and large volume ammunition clips (proposals that are all supported by a majority of the American people).

The bottom line is that no one wants to take guns away from law-abiding citizens, or restrict in any way their right to own a firearm. That is unquestionably guaranteed by the Second Amendment to the Constitution. But restrictions on the type of firearm that can be legally owned, and the ability of the government to require a background check on people trying to buy a gun, have been held as constitutional by the Supreme Court -- and there is no legitimate reason not to pass these laws and save thousands of American lives.

The state of Connecticut has just passed stricter guns laws for that state. Here's what the folks at Think Progress want you to know about the new Connecticut law:

1. It has bipartisan support. Certainly more Democrats than Republicans supported the bill, but the vote in the state House was 105 to 44, with 40 percent of Republicans and 87 percent of Democrats voting for it. Earlier, the Senate voted with only 2 of the 22 Democrats opposing the law. Nearly half of Connecticut Senate Republicans voted for the measure.
2. It expands the state’s assault weapons ban. Connecticut already has an Assault Weapons Ban in place, but the new law will add over 100 new types of guns to the banned list. Among these is the Bushmaster AR-15 gun, which is what the Sandy Hook gunman used in his horrific killing spree. People who already own such weapons will be permitted to keep them, but must comply with new registration standards.
3. Magazine clips will be limited to 10 rounds. Connecticut’s new law will immediately ban the sale of any large-capacity magazine clips that hold more than 10 rounds. Gun owners who’ve already purchased high-capacity clips will be grandfathered in, but they register any extended clips they have, if they plan to keep them. And they can’t bring those bigger clips around with them; the new law requires that any extended magazines still on the market be used only in a private home or at a shooting range.
4. All gun and ammunition sales will require a background check.Effective immediately, every single sale of a gun or of bullets in the state of Connecticut must include a background check. Universal background checks are probably the most widely supported measure in Connecticut’s new gun law; nationally, background checks have 92 percent support.
5. Mental health isn’t left out of the equation. Not every measure in the new law intends to regulate firearms; the bill also includes expanded funding for mental health research, and allows for greater training on mental health issues for Connecticut’s teachers. The bill also creates a council in the state with the express purpose of determining how schools can be more safe, and when mental health records should block someone from being able to purchase a firearm.
Posted by Ted McLaughlin at 12:06 AM