Fundies Aren't As Absolutist As They Claim 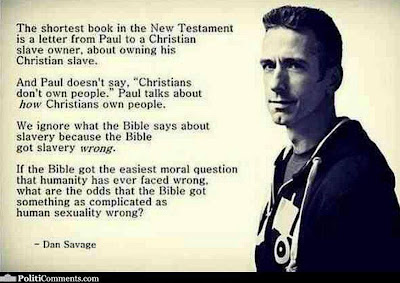 The only real opposition to legalizing same-sex marriage is among religious bigots -- those fundamentalists who want to impose their own religious views on all other Americans (in spite of constitutional guarantees of freedom of, and from, religion). But this religious argument is flawed on a deeper level.

If one wishes to use the biblical injunction against homosexuality, then we have to wonder why they are willing to ignore other parts of that same book -- such as its support for slavery. How can they toss out the biblical acceptance of slavery, while declaring as absolute the biblical view on homosexuality? Since these are the same people who declare that every word in the Bible is absolutely true and the word of god, how can they pick the parts of that book they consider to no longer be relevant (the teaching on slavery) while demanding that other parts of that book remain relevant?

Some will probably argue that the biblical acceptance of slavery was just a recognition that slavery was widely accepted at that time, and the religious book was just trying to make slave owners realize they had a duty to treat slaves decently -- and that society has advanced now and no longer recognizes the validity of slavery. That is a specious argument, since the very institution of slavery is as wrong as anything humans have ever done -- no matter how well a slave master treated his/her slaves, and the Bible clearly supported the institution of slavery as not violating god's commandments (as long as slaves were treated correctly).

In addition, if it is recognized that society changes and therefore institutions like slavery (supported in the Bible) can now be considered unchristian, then can't it also be recognized that society can also change it's attitude on other things (like homosexuality and same-sex marriage) and that they could now be considered acceptable by christians? The very act of cherry-picking which parts of the Bible they support renders the fundamentalist argument against legalizing same-sex marriage to be meaningless.
Posted by Ted McLaughlin at 12:02 AM