How The GOP Will Kill Immigration Reform 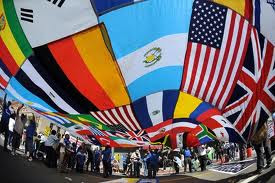 The Republicans did very poorly in the last election among minority voters -- especially Hispanics. And with Hispanics growing faster as a percentage of the U.S. population than any other ethnic or racial group, it became obvious to some national leaders of the GOP that something must be done to reach out to Hispanic voters. They decided that a good way to do that was to support immigration reform -- and to accomplish that, some Republican senators joined a few Democrats and came up with a plan for immigration reform.

It was not a great plan, but it was workable -- laying out both border security measures and a path to citizenship for those undocumented workers currently in the United States. The problem is that while national GOP leaders see the necessity of reaching out to Hispanic voters, their base (many of them anti-immigrant bigots) don't like the idea at all. They still dream of an America surrounded by a high wall and ruled by whites -- with the 11 million undocumented workers being deported.

It is a silly and unworkable dream, but it is theirs -- and now many teabaggers in Congress are taking up their fight. They know would be an electoral disaster to just kill the immigration bill outright, so they have devised a different plan. They plan to amend it to death. They are going to delay the bill as long as possible by inundating the process with amendment after amendment.

And they hope if the bill ever does make it to the floor for a vote, it will have so many right-wing amendments attached to it that it will not be a true reform bill -- but just a border security bill with onerous and ridiculous hoops for undocumented workers to jump through in an endless path just to remain in this country (without achieving citizenship). It would be a bill that no one could love, and would fail.

They seem to believe Hispanic voters are not very bright, and would not realize that they are doing nothing but trying to kill immigration reform -- not improve it. They are wrong, and if they continue down this path they might keep their bigoted primary voters happy, but they will not like what happens in the general election (especially the presidential election of 2016).

Here are just a few of the worst Republican amendments proposed so far (and there will be many, many more):

1. Undocumented immigrants can never become citizens. “No person who is or has previously been willfully present in the United States will [sic] not in lawful status…shall be eligible for United States citizenship.” Offered by Sen. Ted Cruz (R-TX).
2. Mandatory DNA testing. Registered provisional immigrant applicants must submit a DNA sample to the Department of Justice to compare against the Combined DNA Index System (CODIS) at the FBI. Offered by Sen. Orrin Hatch (R-UT).
3. Zero assistance. Would prohibit undocumented immigrants who earn provisional legal status from applying for permanent residence if they qualify for state means-tested assistance, the supplemental nutrition assistance program (SNAP), the temporary assistance for needy families program (TANF), or supplemental security income benefits (SSI). Offered by Sen. Jeff Sessions (R-AL).
4. Bans humanitarian travel. Immigrants who are in provisional legal status but have to go back to their home countries for a humanitarian reason (to visit a sick relative, for instance) would be prohibited from re-entering the United States. Currently, the provisional legal status includes an authorization for travel.Offered by Sen. Chuck Grassley (R-IA).
5. Guts family re-unification. The green card distribution for some foreigners relies on a point allocation system in which a certain number of points must be accumulated before those individuals can qualify for a merit-based visa. This amendment would eliminate points for siblings of U.S. citizens and points for individuals from low-sending countries from counting towards merit-based immigrant visas. Offered by Sen. Jeff Sessions (R-AL).
6. In-person interviews for 11 million immigrants. Sure to slow down the process time for 11 million immigrants, an in-person interview would be required to determine one’s eligibility requirements for provisional legal status. Offered by Sen. Jeff Sessions (R-AL).
7. Limits visas to South Korea. In an effort to force South Koreans to buy beef from the United States again, this amendment threatens to withhold E-5 visas from South Korea immigrants until the country removes its age-based import restrictions on beef.Offered by Sen. Chuck Grassley (R-IA).
8. Enforces head-of-household deportation and causes family separations. Under the current bill, immigration judges have the authority to decline to deport individuals if they believe that the immigrant’s removal will result in hardship for his or her U.S. citizen child. This amendment would waive this judicial discretion and allow the deportation to occur. Offered by Sen. Chuck Grassley (R-IA).
9. Prevents low-income undocumented immigrants from seeking legalization. The amendment would require individuals applying for provisional legal status to maintain regular employment and a “regular income or resources” above 400 percent of the poverty line (more than $92,000 for a family of four). Under the current bill, immigrants must earn at 100 percent of the poverty line or show regular employment.Offered by Sen. Jeff Sessions (R-AL).
10. Restricts visas for refugees. This amendment would prohibit individuals from applying for refugee and asylum status until one year after the Director of National Intelligence submits a review related to the Boston bombings to Congress. Offered by Sen. Chuck Grassley (R-IA).
11. Allows for racial profiling. Would allow Federal law enforcements to take into account an individual’s country of origin when allowing them into the country. Offered by Sen. Chuck Grassley (R-IA).
Posted by Ted McLaughlin at 12:04 AM