I was outraged by these two stories and wanted to comment on them. After thinking about it, I decided they could both be discussed under one heading -- idiots (because that is exactly what I consider these people to be). 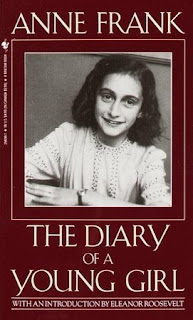 Let me start with this story of a mother in Michigan. Gail Horalek has decided that one of the most widely-read books in the world (and deservedly so), The Diary of Anne Frank, is pornographic. Her middle school daughter was "made uncomfortable" when she read the book, according to Horalek, because there is a passage in the book where Anne discusses her genitalia.

This has horrified Horalek (who is evidently trying to hide from her daughter the fact that humans have genitalia), and she now wants the school to either remove the book or make parents sign a permission slip before their children can read it.

Now Horalek had a choice when her daughter told her it made her "uncomfortable". She could use that as a teaching moment, and initiated a discussion of both human sexuality and the ideas contained in the book -- or she could try to ban the book. Sadly, she chose the latter.

The fact is that The Diary of Anne Frank is one of the most important books ever published. It is absolutely appropriate for middle school aged children, and in my opinion, should be required reading. I made sure my children read it before they entered high school. They were also made "uncomfortable". But it was by the horrific actions of the Nazi regime in carrying out the murder of innocents like Anne Frank and her family.

This woman is an idiot. 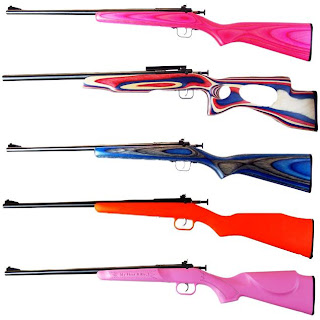 This story is even more horrific, because it involves the killing of a two year old child. The baby was shot by her five year old brother. And the crazy part is that the five year old didn't use an adult's gun to shoot his sister. He did it with his own gun.

The parents of the two children had bought the five year old his own gun, and given it to him. The gun, a .22 caliber rifle called a Crickett, was like those pictured at the left -- made and marketed to children by Keystone Sporting Arms (a Pennsylvania gun company).

The shooting is being called an accident, but I have to question that. I'm not blaming the five year old, but his parents and the gun company. Giving a dangerous firearm to a five year old and marketing weapons made especially for children are both ridiculously dangerous actions, and create a situation where a tragedy is likely to happen. It doesn't take a genius to figure that out. Personally, I hold both the parents and the gun company responsible for the death of the two year old.

The parents and the gun-makers are all idiots.
Posted by Ted McLaughlin at 12:02 AM