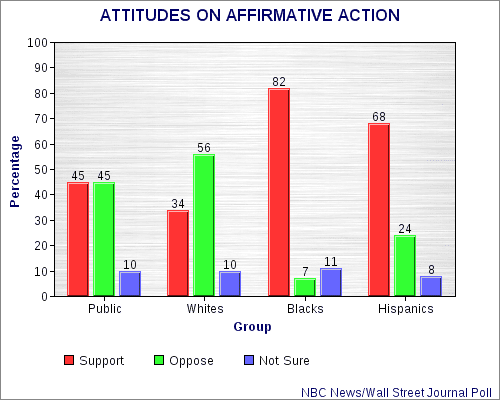 Affirmative Action was initiated in this country to assure equal opportunities for minorities (who have been denied equal opportunity for a couple of centuries). It is not a quota system, requiring minorities to fill a certain number of slots in a school, company, or agency (that is illegal). And it does not unfairly promote unqualified minorities over qualified whites (although the right-wingers have tried hard to convince Americans that it does). It simply says that an agency, company, or school should search for qualified minorities in an effort to diversify their work or student population.

I am an older white man, and I have always supported affirmative action. I do not feel that it discriminates against me (or any other qualified white person). And after working in several places with an active affirmative action program, I can honestly say that the minorities I worked with were every bit as qualified as the whites I worked with. I thought, and still think, it is a good thing that those qualified minority workers were finally getting an opportunity to prove their worth.

But a recent NBC News/Wall Street Journal Poll (conducted between May 30th and June 2nd of 1000 nationwide adults -- with a 3.1 point margin of error) shows that a lot of Americans disagree with me. The survey says that Americans are evenly split on the issue of affirmative action -- with 45% thinking it is still needed and 45% thinking it is no longer needed (with 10% not sure).

And not surprisingly, the biggest divide is along racial lines -- with only 34% of Whites thinking it is still needed, while 82% of Blacks and 68% of Hispanics think it needs to be continued. This is very disappointing to me. What on earth are my fellow Whites thinking? Have they bought into the ridiculous "reverse discrimination" argument that has been floated for decades now by right-wingers (and racists)? Do they not understand what affirmative action is -- thinking it is some kind of quota system? Or are they just afraid of competing with minorities on an equal basis?

Surely they can't think that racism and discrimination no longer exists in the United States. The election of President Obama has shown clearly that racism is still a strong force in this country -- and it exists both on an individual and institutional level. In fact, that election has made the racists bolder, and they feel freer to broadcast their hate message to other Americans than they have in decades. They have shown us that if affirmative action is eliminated, there is little doubt that many opportunities would no longer be available to minorities.

I know Americans would like to think that all races and ethnicities should compete equally for the opportunities that are available -- and in a perfect world (where racism did not exist), I would agree. But we don't live in such a world. We still live in a world where racism thrives, and where much work remains to be done to get rid of it. Like it or not, we still need affirmative action. 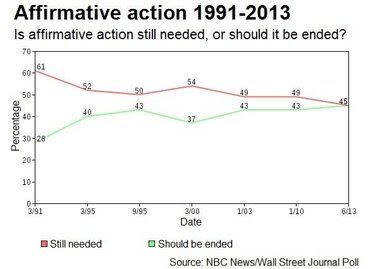